Weston McKennie and Nick Taitague made their first-team debuts at Schalke 04 in a 3-1 loss to second division Hannover, while McKinze Gaines saw first-team action for VfL Wolfsburg in a 1-1 tie with second division Arminia Bielefeld. 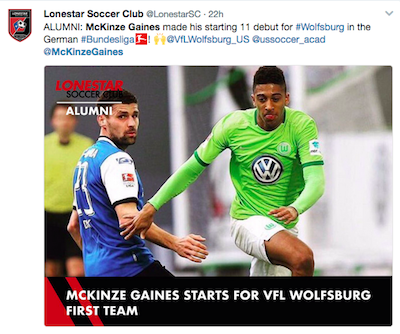 With 10 Schalke players away on national team duty, Coach Markus Weinzierl started four U-19 players, including 18-year-old defensive midfielder McKennie, who joined Schalke from FC Dallas' academy. Taitague, an 18-year-old Virginia product, entered the game, played in front of 6,500 in Hannover, in the 82nd minute. Haji Wright, an 18-year-old California product who has scored 12 goals in 16 U-19 games for Schalke, was unavailable because of injury. Wright made his first-team debut in a friendly during the winter break against Belgium's Oostende in Spain.

Gaines, a 19-year-old South Texas product who played for Wolfsburg in January, assisting on a goal in a 2-0 Florida Cup win over the Tampa Bay Rowdies, played the first 45 minutes in the tie with Bielefeld in front of 1,500 fans in Wolfsburg. Eleven Wolfsburg players are away on on national team duty.

Coach John Hackworth  added eight players to the U.S. U-17 Residency Program squad for a 37-player roster that played four games against Japan as the U.S. U-17 national team continues its preparations for the 2017 U-17 World Cup qualifying tournament April 21-May 7 in Panama.

“Our coaching staffs agreed to play each other in back-to-back matches on each game day,” Hackworth said. “This [allowed] both staffs to prepare and evaluate a greater number of players each day against a quality international opponent. … We scheduled these match days at the same interval that we will be faced with in World Cup Qualifying, so our periodization for these matches will mirror our process in Panama a little over a month from now.”

“Japan is one of the top programs in the world,” Hackworth said.

Players born on or after Jan. 1, 2000, are eligible for the 2017 U-17 World Cup. The youngest players on the 37-player roster for the Japan games were 2001-born goalkeeper David Ochoa, midfielders Taylor Booth, Marcelo Palomino and Indiana Vassilev, and forward Bryan Reynolds Jr.

Tab Ramos on the next chapter of U-17 program

Tab Ramos, U.S. Soccer's Youth Technical Director and U-20 men’s, discussed the closure of U.S. Soccer's U-17 Residency Program, in an interview at USSoccer.com.

“When the Residency Program started [in 1999], there was no Development Academy, there were no MLS teams investing in youth development and there was no particular training direction," Ramos said. "Most youth players at all levels were training twice per week and playing anywhere from one to five games on the weekends. Now we live in a completely different landscape.

"The DA has now been around for 10 years and players are taught to play, hold the ball and be creative. There is a clear 'training over games' mentality of learning the game properly, and more importantly clubs all over the country are investing millions in youth development led by teams in MLS.”

The Residency Program will cease following the current spring semester. Players in residency are aiming for the 2017 U-17 World Cup.

“Players currently in Residency will go back to their clubs, the majority of which will be in excellent club environments and living at home,” Ramos said. “[The U-17 program] will look very similar to our U-20 national team programming. There will be five or six camps per year and the head coach will be keeping track of players at their own clubs.”