Klimkova has been a U.S. Soccer Women's Development Coach since January 2015 and has served as the head coach of the U.S. U-19 women's national team. Carr has been a U.S. Women's Development Coach since November 2014 and has been coaching the U.S. U-15 girls' national team. Both have also worked as assistant coaches for other age groups.

Klimkova is charged with preparing her team for Concacaf qualifying for the 2018 FIFA U-20 Women's World Cup that will be held in France. 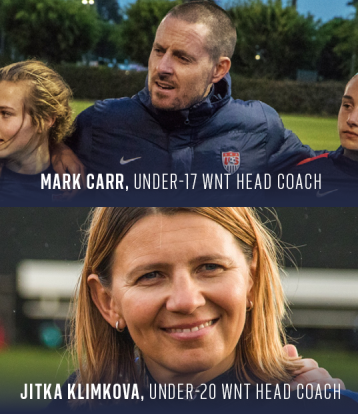 “Our players are among the most physical and most competitive in the world and those are excellent qualities," said Klimkova in a USSoccer.com Q&A. "Our technical skills are definitely getting better thanks to an increased technical focus across the United States in recent years, but we still need to get better, especially in our decision-making process. It is not about the coaches telling the players what they have to do during the games, the players have to have supreme comfort with the ball at their feet and have to get used to making their own decisions as well as being comfortable to learn from mistakes.”

Carr’s U-17 team is aiming to qualify for the 2018 U-17 Women's World Cup that will be held in Uruguay. Carr coached the U.S. U-15s to the title at 2016 Concacaf U-15 Girls Championship, at which they won all seven games by shutout. The core of that team will be transitioning to the U-17 level this year.

“I am obviously very excited to work with this group of amazing players again and I know this age group very well,” Carr said. “It is a deep pool of creative players, each who all have their own talents and strengths. … Moving up with this group is a natural progression that I feel very comfortable with and I’m extremely honored and excited to continue the development journey with this special group of players. My focus will be to help each player grow and develop and continue through our pathway, while at the same time, embracing the opportunity to qualify for the 2018 U-17 Women’s World Cup and then doing our best to win it.”

"Over the last few years we've hired a cadre of Development Coaches as part of a plan to expose them to the international game and develop them into future candidates for our World Cup age-groups," said Women's Youth National Teams Director April Heinrichs. "In hiring Mark and Jitka as our U-17 and U-20 coaches respectively, we're putting two of our best and most experienced coaches in front of our best players. They have age-appropriate head coaching experience on the international level, are familiar with our player pools, methods of coaching, style of play and philosophy. Mark and Jitka will start with their respective teams in their upcoming camps without skipping a beat."

Carr, 38, came to U.S. Soccer after three years (2012-2014) as the Girls' Premier League Director and Technical Director for the Lonestar Soccer Club in Austin, Texas. He had also, before joining U.S. Soccer full-time, served as a scout, helped run U.S. Soccer Training Centers in Texas, and assisted with the U-14 girls national team camps.

Jitka Klimkova’s 24-player squad for her first training camp, April 8-15 in San Diego, since taking the helm of the U.S. U-20 women’s national team includes four of players who were involved in the previous U-20 cycle, including Emily Fox and Savannah DeMelo, who both played in the 2016 U-20 Women’s World Cup in Papua New Guinea.