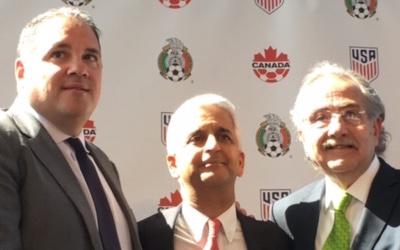 What do we know?

FIFA has already announced plans to expand the 2026 World Cup to 48 teams with a round-of-32 phase (16 games) added after a group phase involving 16 groups of three teams, increasing the number of games from 64 to 80.

WHAT WILL BE GAME-SPLIT AMONG HOSTS? The North America bid will call for the USA to host 60 games, and Canada and Mexico 10 each. All games from the quarterfinal stage on -- eight in all, if the third-place game is maintained -- will be played in the USA.

WHAT'S THE MOST POWERFUL ARGUMENT FOR NORTH AMERICAN BID? The availability of ready-to-go stadiums and accompanying infrastructure and hosting facilities will give the North American bid an overwhelming advantage. It will be a powerful argument in face of concerns that international events like the World Cup and Olympics necessitate wasteful public spending on stadiums like Brazil's white elephants.

“Building sports facilities that don’t have a long-term use is not one that is particularly inviting for anyone,” Gulati said. “We have stadiums that exist. It’s a far better solution than spending hundreds of millions of dollars, if not billions, on stadiums, especially that don’t have use beyond the tournament.”

DOES TRUMP ADMINISTRATION SUPPORT JOINT BID? Given the tensions between the United States and Mexico over President Donald Trump's plans to build a border wall, the prospects of a USA-Mexico bid raise the issue of Trump's position on a joint bid.

“We have the full support of the United States government in this project,” Gulati said. “The president of the United States is fully supportive and encouraged us in having this joint bid. He is especially pleased that Mexico is part of this bid, and that’s in the last few days that we have gotten further encouragement on that. We’re not at all concerned about some of the issues that other people may raise. We looked at bidding alone, and again, decided we wanted to bid with our partners in North America, and we have a strong encouragement from President Trump to that very end.”

The only nation that has expressed any interest in bidding is Morocco, which lost out to the USA for the 1994 World Cup hosting rights and also lost out for the 1998, 2006 and 2010 finals.

What don't we know?

All details of what is required in a World Cup bid and what the USA, Canada and Mexico propose will have to be confirmed by FIFA. “That is our proposal,” said Gulati. “It’s their tournament.”

HOW MANY VENUES WILL BE NEEDED? The minimum and maximum number of venues is not known, but Gulati says the goal will be to use more venues rather than less to help grow the sport in North America. That should not be a problem as about 50 venues should meet the hosting requirements for a World Cup. At least two venues each in Canada and Mexico will likely be used.

WILL CO-HOSTS QUALIFY AUTOMATICALLY? The Bureau of the FIFA Council -- comprised of FIFA president Gianni Infantino and the presidents of each of the six confederations -- has proposed that Concacaf get six automatic bids to the World Cup, beginning in 2026.

In addition to that, two more Concacaf nations would enter the new six-team playoff series if a Concacaf nation or nations hosted the World Cup. What the Bureau of the FIFA Council did not decide was how many hosts -- if there were more than one -- would qualify automatically.

Gulati, a member of the FIFA Council, noted that no host or co-host has not qualified automatically in World Cup history. Even if all three hosts qualified automatically, that would leave as many as six other Concacaf teams eligible to compete in the finals. FIFA reserves one hosting spot in the 48-team field, so two others would come from the Concacaf allotment of six teams.

That would leave Concacaf with an allotment of 3+4+2 -- three co-hosts, four automatic qualifiers and two possible qualifiers from the six-team playoff series.

WHEN WILL GAMES BE PLAYED? Most games during the 1994 World Cup in the USA and 1970 and 1986 World Cups in Mexico were played during the afternoon to accommodate European television.

No plans were announced for when the North American bidders want to play their games. The heat during the afternoon at many U.S. and Mexican venues is comparable to the conditions in Qatar, where the 2022 tournament has been moved to the late fall to avoid the searing summer heat, and the issue of warming temperatures is much greater than it was in 1994.

On the other hand, the dominance of European television has lessened -- media rights fees from the USA are now the single biggest source of media revenues for FIFA -- so games will more likely be played in the evening in 2026.

WHAT WILL BE TRUMP'S POSITION ON VISAS? Infantino has insisted that any U.S. bid must allow the free movement of players, officials and fans, putting it up against the current position of the Trump administration to restrict the movement of citizens from six nations -- Iran, Syria, Somalia, Sudan, Yemen and Libya. As a frequent World Cup contender, Iran is the nation most likely affected by any travel ban.

By 2019 and 2020, when a World Cup 2026 bid will be needed to be flushed out -- the final decision will be made in 2020 -- the U.S. government's position on the travel issue will be clearer. (As part of its agreement to host the 2018 World Cup, Russia had to ease its travel restrictions on foreigners entering the country.)

Gulati views a joint World Cup as a unifying influence. "We don't believe sport can solve all the issues in the world," he said, "but, especially with what's going on in the world today, we believe this is a hugely positive signal and symbol of what we can do together in unifying people, especially in our three countries."

WILL JOINT BID PREVAIL? Only the USA alone could host an 80-game World Cup, so that gives it the leverage over Mexico and Canada to impose the terms of the game split: 60/10/10. But the inclusion of Canada and Mexico in a joint bid is an insurance policy against possible international opposition to a U.S. bid.

FIFA wants to at all costs avoid another contentious bidding campaign -- every campaign involving multiple bidders from the 1998 World Cup through the 2026 World Cup has been marred by corruption or allegations of corruption and massive spending -- so a preemptive bid from the USA, Canada and Mexico is very much in its interest.

The USA was the heavy favorite in 2010 for the 2022 World Cup hosting rights -- and had the support of then-FIFA president Sepp Blatter -- but Qatar came out of nowhere to snatch the bid away. Anything can happen.

Asked what has he learned from unsuccessful 2022 bid, Gulati remarked, "Make sure we have more votes than the other guys."