The Borussia Dortmund-Monaco match in the UEFA Champions League was postponed on Tuesday after the Dortmund team bus was the apparent target of an explosive attack. According to reports, three explosions went off after the bus exited its team hotel, L'Arrivee Hotel and Spa, in Hoechsten, about eight miles from Signal Iduna Park, site of the match that will be played on Wednesday.

Police told Dortmund CEO Hans-Joachim Watzke the explosives were placed in the bushes near a parking lot along the road and detonated as the bus passed. The initial findings of Dortmund investigators is they assume it "was an attack with serious explosive devices."

Spanish defender Marc Bartra, who was sitting in the back of the bus was injured in the explosion and was taken to a local hospital with a hand injury after the force of the explosions shattered the back window. He had surgery to repair a broken bone in his right wrist and remove objects from his arm.

Borussia Dortmund goalkeeper Roman Buerki, who was sitting next to Bartra, told Swiss daily Blick that "there was a huge bang, literally an explosion" and glass flew about.

"We're all shocked," Buerki added. "Nobody thought about a football match in the minutes after that." 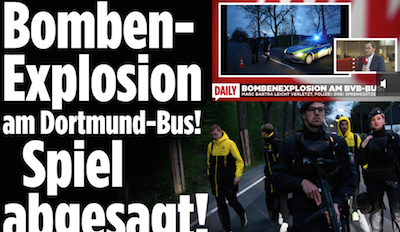 Bild published a photo of Dortmund players milling around after the bus stopped. Among those in the photo was 18-year-old American Christian Pulisic, who was expected to start in the biggest match of his club career.

"The whole team is in a state of shock," said Watzke. "You can't get pictures like that out of your head. I hope the team will be in a position to be able to compete tomorrow on the pitch. In a crisis situation like this, Borussia pulls together."

Monaco fans at the stadium chanted "Dortmund" in support of the home team, while clubs across Europe sent messages of support for BVB and Bartra, who previously played at Barcelona. Borussia Dortmund, in turn, sent out a request for residents to take in Monaco fans, who will have to stay in town an extra day for the makeup game.