FC Dallas beat Mexico's Monterrey, 2-1, in the final to become only the second team to win the Dallas Cup U-19 Super Group since its inception in 1990. 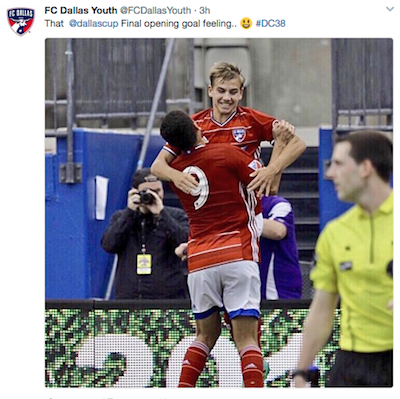 Monterrey equalized in the 82nd minute but 18-year-old Arturo Rodriguez, a 59th-minute sub, hit the winner with a 30-yard shot in the 89th minute.

Pomykal scored the gamewinner in the 2-1 semifinal win over Coritiba of Brazil. Ferreira, who opened the scoring in the semifinal, also set up Pomykal's decider.

Jonathan Gonzalez, a member of the U.S. U-20 national team that qualified for the 2017 U-20 World Cup, started for Monterrey.

FC Dallas teams reached two other Dallas Cup finals this year, winning the U-16 crown and finishing runner-up in the U-14 division.

One other American team won a Dallas Cup title this year, Cedar Stars Newark Green taking the U-18 crown.

Stefan Stojanovic of Sockers FC scored twice and Konrad De La Fuente  struck once for the U.S. U-16 boys national team in a 3-0 win over Mexico at the the Mondial Minimes in Montaigu, France. The victory followed a 3-2 loss to Japan and a 1-0 win over Belgium.

The USA, coached by U.S. under-18 head coach Omid Namazi while U-16 head coach Shaun Tsakiris is serving as an assistant coach with the U.S. U-17 national team, faces Brazil on Monday.

Barcelona-based De La Fuente, who scored on a penalty kick against Belgium, also scored in the loss to Japan, as did Gabe Segal of Bethesda SC. 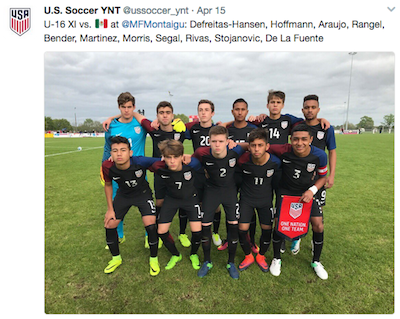 NYCFC, coached by Matt Pilkington, did not concede a goal in its five games in Frisco, Texas. 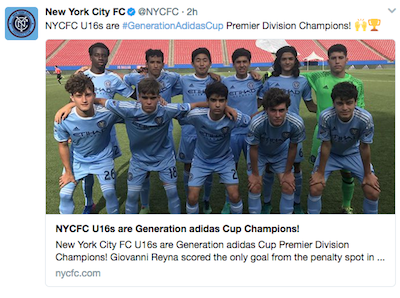 The New York Red Bulls were the only MLS team to reach the semifinals of the Champions Division. In group play, they rebounded from a 3-1 loss to Estudiantes de la Plata to beat Toronto FC, 3-1, and Tijuana, 5-0, before falling to Flamengo in a penalty-kick shootout after a 1-1 tie in the semifinals. The Red Bulls finished third with a PK shootout win over Independiente del Valle after a 1-1 tie in the third-place game.

New U.S. U-17 girls national team coach Mark Carr has named a 20-player roster as the U-17s kick off a new cycle with a trip to Italy and Slovenia April 19-30 for the second annual Torneo Femminile Delle Nazioni.

In this year’s competition, for players born in 2001 or later, the USA is in Group B with Slovenia, England and Mexico. Group A is comprised of Italy, France, Germany and Belgium.

The USA opens against Slovenia on April 25 before facing Mexico April 26 and England April 28.

Four players on Carr's roster are in their second U-17 cycle: forwards Jordan Canniff and Lia Godfrey and defenders Kennedy Wesley and Kate Wiesner. All four played for the USA at the 2016 U-17 Women’s World Cup in Jordan.

Eighteen players on the U.S. roster were born in 2001, the cut-off year for the 2018 U-17 Women’s World Cup in Uruguay. The two players born in 2002 are Talia DellaPueruta and Makenna Morris.

U.S. Soccer Development coach Jaime Frias  is running a 24-player camp for the U.S. U-18 women's national team April 15-22 in Chula Vista, California. All the players in the squad were born in 2000.