The capital of the soccer universe? Right now, it’s Madrid. Real Madrid and Atletico Madrid have reached the UEFA Champions League semis for the third time in four seasons. And on Sunday, Real Madrid hosts El Clasico, which is expected to draw worldwide TV viewership of more than 600 million -- while giving Barcelona a chance to save its season.

Sunday’s El Clasico airs at 2:45 p.m. ET in the USA on beIN SPORTS and beIN SPORTS en Espanol. And it’s a must-win game for Barcelona to keep hopes alive for a third-straight La Liga title, because Real Madrid sits atop La Liga with a three-point lead over Barcelona, which has played a game more. That Barcelona was eliminated from the Champions League on Wednesday, failing to overcome a 3-0 first-leg deficit against Juventus, makes the clash even more crucial for the Catalan club.

"Picking yourself up after a defeat like this is hard, but we have the best motivation [we] can have," said Barcelona coach Luis Enrique after the 0-0 tie with Juventus on Wednesday, "which is visit the home of our eternal rival -- there's no better place than to go to than the Bernabeu. It will be as special as ever and it's a marvelous stimulus: a key game against the leader, a direct opponent. We have to get ready and compete and I am sure we will do that.” 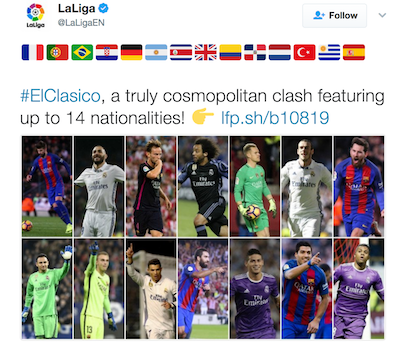 El Clasico always has an impact on the La Liga title race, but the intrigue goes far beyond that. And I'm not talking about obsessive regionalism, the off-field rivalry between Catalonia and Spain's capital. This is a game that puts on the field not only the two greatest players of their generation, Lionel Messi and Cristiano Ronaldo, but national team stars from up to 14 different countries. To name a few, there's German 2014 World Cup champion Toni Kroos, Frenchman Karim Benzema, Uruguayan Luis Suarez, Croatians Luka Modric and Ivan Rakitic, Marcelo, one of five Brazilians between the two squads, and of course the Spanish stars, such as Sergio Ramos, Gerard Pique, Jordi Alba, Sergio Busquets and Andres Iniesta.

Barcelona, which will miss Neymar because of a suspension, is in a rut. Its 3-0 loss to Juventus came three days after it wasted a chance to gain ground on Real, losing, 2-0, to Malaga while Real Madrid tied Atletico Madrid, 1-1.

"We are human, of course something is going to affect us," Barcelona’s Gerard Pique said after Wednesday’s Juventus game. "On Sunday there's another big match, and we'll go there to compete and try and win. Even if we are not in our best moment, I believe we can go there and win."

If it fails, Barcelona still has a chance for a 2016-17 title, the Copa del Rey, in which it meets Alaves in the May 27 final. But this would mark the first time since 2012 that it hasn’t won La Liga or the Champions League or both.

While Real Madrid is aiming for its second straight Champions League title, it hasn’t won La Liga since 2012. Since then, Barcelona has won three titles and Atletico Madrid one. (Atletico Madrid is currently in third place, 10 points behind Real.)

Real Madrid’s 2014 and 2016 Champions League titles came with final wins over Atletico Madrid. The semifinal draw takes place on Friday, when we’ll know whether there’s another chance for an all-Madrid final.

But on Sunday, all eyes will be on El Clasico.