Violent Goalkeeping (Part 1): Players at risk as soccer ignores its own rules

Goalkeepers, we are told, need protection. No doubt we all agree. Up to a point.

But this “point” -- always difficult to define precisely -- is a limitation that no longer has much meaning. How can it mean anything when the “protection” now allows goalkeepers to go unpunished when they commit flagrant and dangerous fouls. Fouls that are clearly against the rules of the sport, fouls that would surely be severely penalized if committed by field players.

This is a serious situation -- borderline scandalous -- which calls for prompt action from FIFA. It hardly demands drastic action, for no new rules are needed.  All that is required is that FIFA makes sure that the current rules are enforced. That referees do their job. Nothing more than that.

Consider the following two examples of soccer action -- both of them likely to be seen in almost any game. Anomalies that FIFA and IFAB (soccer’s rule-making body) must correct.

Anomaly No. 1: The goalkeeper races out of his goal to catch or punch away a cross. It is more than likely that there will be a crowd of players -- teammates and opponents -- in front of him. But this does not concern our intrepid keeper who launches himself forcefully -- and, yes, bravely -- into the crowd. Maybe he gets the ball, maybe not. But he will collide heavily with at least one player -- usually an opponent.

Now, how many penalty kicks are given against keepers who do that? It never happens -- either the referee makes no call, or he calls a foul on the opponent who has just been smashed into.

This takes some explaining, especially given that the keeper is likely to be jumping high, and leading with a raised knee. To which can be added an element of bullying -- the keeper is very likely to be the biggest and heaviest member of his team.

This is clearly yellow-card reckless, if not outright red-card excessive force. But the penalty kicks that should result are never given. They never have been.

Anomaly No. 2: “Playing in a dangerous manner” is nicely identified in the rulebook as action that “threatens injury to someone (including the player themself) ...”  The example that is usually cited is that of a player who stoops low to head the ball. Even though he will be the one likely to get his head kicked in, he is the one in the wrong, placing his head down where feet are deemed to belong.

So he gets an indirect free kick called against him. But ... why is it that the rule is never applied to goalkeepers? When a keeper dives at an opponent’s feet, he is putting his head quite close to ground level. It is a dangerous move, indeed a brave one, by the keeper. But it surely fits the rulebook’s definition of dangerous play, and a foul should be called against the goalkeeper. So why do referees never call it?

Two examples of violent and dangerous play by goalkeepers. Particularly dangerous as they are likely to lead to head injuries. Both clearly contravene the rules, yet both are systematically ignored by referees.  How so?

Because a tradition has arisen in soccer that it is OK for goalkeepers to crash into opponents, often with a knee making contact with the opponent’s head, or for them to throw themselves at the feet of moving opponents. Those actions, carrying a high risk of nasty injuries to both the keeper and his opponents, are considered acceptable.

I am unaware of the origin of this extraordinary mindset. But, apparently, it is not to be questioned. It is duly referred to, never critically, by TV pundits (invariably ex-players) whenever the incidents occur -- which they do quite frequently.

Some choice examples of recent punditry:

• “If you’re going to come out, as a goalkeeper you take everything in your way, you take the players, the ball ...”  That’s former Arsenal and England defender, Lee Dixon.

The goalkeeper pundits have plenty to say, of course -- not only defending the mayhem, but actually praising it:

• Brad Friedel, former Spurs and USA goalkeeper, quite carried away as he describes how Real Salt Lake goalkeeper Nick Rimando has just come racing out of his goal to punch the ball away ... and in doing so has jumped into Colorado’s Lucas Pittinari and left him lying dazed on the ground: “That is outstanding goalkeeping -- a big strong punch, a big strong body, big collision, exactly what you want.” 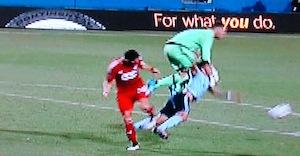 • Andy Gruenebaum, former Columbus Crew goalkeeper, was equally excited after Dallas keeper Chris Seitz had punched the ball away while jumping knee-first into the back of, and flattening, Kansas City’s Dom Dwyer: “He [Seitz] has made up his mind from square one, he’s coming for this ball, that’s what you’re taught to do, protect yourself, you can’t worry about them ... I think it’s great goalkeeping, but also unlucky for Dwyer to get in the way of that.”

We can add a contribution from another U.S. national team keeper, Brad Guzan, playing for Aston Villa in a 2015 game against Leicester, racing forward to punch out a high ball and simply hurling himself into a group of players in front of his goal. Guzan did not get to the ball. Leicester’s Nathan Dyer got there first and headed it into the goal. Guzan, left knee raised, jumped high into Dyer and knocked him out cold. The following morning’s Daily Star had no criticism of Guzan, and evidently found the incident quite amusing, referring to “Knockout Nathan” and how Guzan had “made him see stars.” 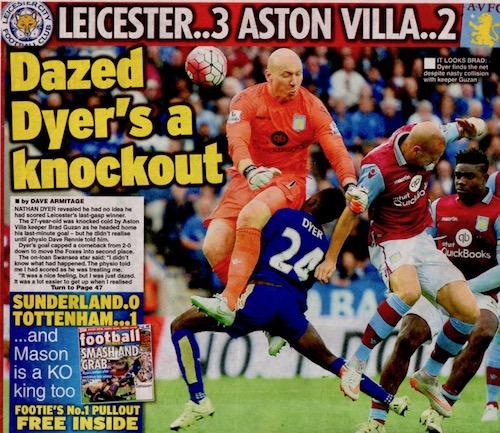 Ignoring blatant goalkeeper fouls reached a shameful peak during the 2014 World Cup final when the German goalkeeper Manuel Neuer (widely ranked as the world’s best) leapt into Argentine forward Gonzalo Higuain, just inside the German penalty area. The collision was spectacular ... and frightening, as the leaping Neuer smashed his knee -- his raised knee -- into Higuain’s head.

A dangerous foul that recalled Harald Schumacher’s appallingly brutal assault on Patrick Batiston in a 1982 World Cup semifinal between Germany and France -- for many, the worst foul they have ever seen.

Incredibly, the Italian referee Nicola Rizzoli (presumably the world’s best?) called a foul against Higuain. As Higuain had been hardly moving at the moment of impact, with his back to Neuer, what could he have been guilty of? Did Rizzoli think that Higuain was committing a foul simply by being in Neuer’s way?

Rizzoli obviously knew that his call didn’t make sense. Some days later he backed down, slightly, stating that no foul had been committed, neither by Neuer nor Higuain. It was 1982 all over again, when Schumacher went unpunished for his violence.

The incidents were evidently just a normal part of the game.

Maybe they were, once upon a time. But not now. They cannot be, not in 2017. And this is where FIFA’s attitude simply defies understanding. Because it surely knows that during the past decade there has been an explosion of knowledge about -- and much research into -- the dangers of concussive head injuries.

Knowledge that all sports administrators must respond to. Any sport that unnecessarily exposes its players to head injuries is surely going to find itself in big legal trouble pretty soon. So what action has soccer taken to at least reduce the incidence of head injuries in the sport?