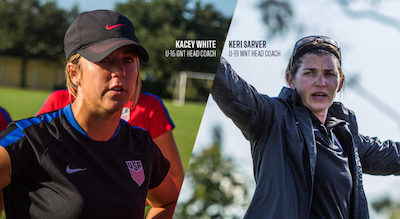 Sarver replaces Jitka Klimkova, who is now head coach of the U-20 national team, replacing Michelle French. White succeeds Jaime Frias, now in charge of the U-18s. Mark Carr, the former U-15 coach, was named U-17 coach earlier this month, replacing B.J. Snow. April Kater remains the U-14 head coach, a position she has held for four and a half years.

“This is the first time in our history that we’ve had full-time youth national team coaches who are dedicated year-round to these specific age groups outside the World Cup teams [U-17 and U-20],” said Women’s Youth National Teams Director April Heinrichs, who had also been serving as U-18 head coach. “Keri Sarver and Kacey White have committed themselves to coaching professionally, have coached club and college soccer and became mainstays as assistant coaches within our Youth National Team program over the last several years. We are excited to welcome them to our staff in their new positions.”