Two years ago, in qualifying play for the 2015 U-17 World Cup, the USA, then coached by Richie Williams, faced Jamaica twice. In group play, the Americans lost to the Reggae Boyz, 1-0.

The rematch came in a playoff with a World Cup berth at stake. The USA again failed to score against the Jamaicans and after a 0-0 tie, American star Christian Pulisic stepped up first in the penalty kick shootout. His shot was saved by goalkeeper Jahmali Waite, but the next five U.S. shooters converted while two Jamaicans shot high and wide.

Had the shootout gone the other way, the USA would have missed the U-17 World Cup for a second straight time, as Williams’ team had failed to qualify for the 2013 World Cup.

Before that, the USA was the only nation that qualified for all 14 of the biennial U-17 World Cups.

John Hackworth, who had coached the USA at the 2005 and 2007 World Cups, returned to the post, replacing Williams, who failed to the get USA out of the first round at the 2015 World Cup.

Unseeded at the 2017 Concacaf U-17 Championship, the USA was drawn into a four-team first-round group with two-time defending champion Mexico, which at the last three U-17 World Cups finished fourth (2015), runner-up (2013) and champion (2011). Being grouped with Mexico made it crucial for the USA to pick up a win Sunday’s opening game against Jamaica.

And Hackworth’s team came through big time, routing the Reggae Boyz, 5-0. It faces Mexico, a 6-0 winner over El Salvador, on Wednesday (6:30 pm ET; Univision Deportes, Concacaf YouTube) and El Salvador, which has yet to qualify for a U-17 World Cup, on Saturday. The top two group finishers advance to the second round, from which four of six teams will earn spots at the 2017 U-17 World Cup in India.

Against Jamaica, Ayo Akinola  scored two of the USA's five goals, all of which came in the second half.

"I thought we were fantastic, especially in the second half," said Akinola, who also got an assist. "In the first half we didn’t play to our expectations or our style. In the second half … our coach talked to us about some game plans and some tactics, and we actually put them into action. So I’m very proud." 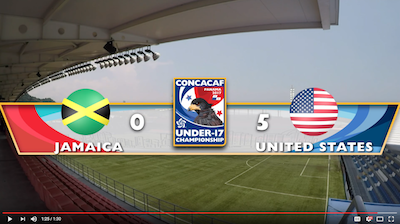 In a first half in which the Americans outshot Jamaica, 8-3, Reggae Boyz goalkeeper Tajay Griffiths stopped shots by Blaine Ferri and Akinola -- and Andrew Carleton's 22nd-minute penalty kick.

Timothy Weah, a 65th-minute sub for Carleton, made it 2-0 by tapping in an Akinola pass in the 77th minute. Weah had fed Akinola, who juked Shane Ricketts before delivering the return pass.

The final three goals came within seven minutes, beginning with Josh Sargent, who stretched his leg to poke the ball Kendall Edwards was trying to shield past stranded Griffiths in the 87th minute.

Sargent set up Akinola’s first goal, a low drive inside the near post, in the 88th minute. Two minutes into stoppage time, Akinola hammered home a low half-volley from 22 yards.

• Ian Jairo Torres helped create three goals in Mexico's 6-0 rout of El Salvador. Torres, who turns 17 in July, has already made a Liga MX appearance, playing 45 minutes last November for Atlas against Jaguares. His debut was celebrated in Mexico for being the first Liga MX appearance by a player born in this millennium. The Guadalajara native, at 16 years, 4 months and 14 days, had become the sixth youngest player to see Liga MX action.

Daniel Lopez, who scored twice, plays for Tijuana Xolos U-20 team. He debuted for the first team in a friendly at the LA Galaxy in February. 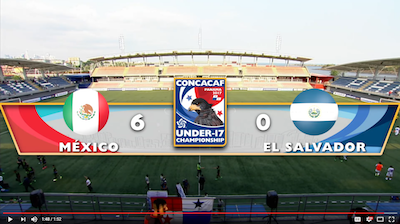