For Borussia Dortmund, the Bundesliga title is beyond reach and it’s out of the UEFA Champions League, leaving the German Cup as the last chance for BVB and its American teenager Christian Pulisic to lift a title this season. Its German Cup semifinal opponent Bayern Munich on Wednesday also has extra incentive.

Runaway Bundesliga leader Bayern Munich can clinch the league title this weekend, in its fourth to last game of the season. That gives Bayern a record fifth straight Bundesliga title. But it too exited in the quarterfinals of the UEFA Champions League. And winning just one title simply isn’t good for Bayern Munich, which has won three of the last four German Cups.

“If this is a good or a very good season hinges on the German Cup,” said Bayern captain Philipp Lahm, who’s retiring after this season. 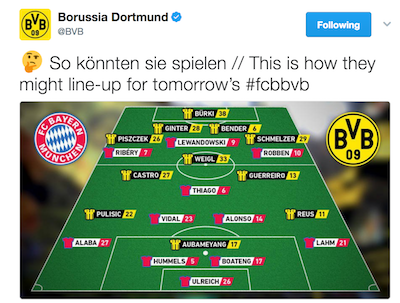 Bayern and BVB have met in the last five German Cups. All five games went into overtime, with Bayern winning three times.

Pulisic has played in two German Cup games for BVB this season.

Pulisic was a halftime sub in the round of 16 clash with Hertha Berlin and assisted on Marco Reus’ equalizer in the 1-1 tie that BVB won in a penalty-kick shootout. (Pulisic had his spot kick attempt saved goalkeeper Rune Jarstein.)

Pulisic started in the quarterfinal against third division Sportfreunde Lotte and opened the scoring of a 3-0 win.

So far, the Pennsylvania product has played twice against Bayern Munich, both this season. He came on as an 88th minute sub in a 1-0 BVB home win in November and went the full 90 in a 4-1 loss in Munich on April 8.

"We had six players who never played in Munich before in the last game,” Tuchel said. “It's a pressure that you cannot feel in a video session. … Two weeks ago we had no chance. Now we feel ready for a big performance."