Seven weeks after Portland Timbers owner Merritt Paulson announced that a project to expand Providence Park had been finalized, specific plans for that expansion have been released.

At an estimated cost of $50 million – which is more than was spent on renovations prior to the club’s entry into MLS – capacity will be increased by approximately 4,000 from its current figure of 21,144. The Timbers have sold out every game since they joined MLS in 2011 and have a season-ticket waiting list of about 13,000.

The expansion – which will be privately funded -- will add a covered, four-level section to the east side, which currently consists of eight sections of seating and the KeyBank Club observation deck. The 93-foot-tall addition, situated above and behind the current structures, will be steeply terraced to bring the new sections as close to the field as possible. 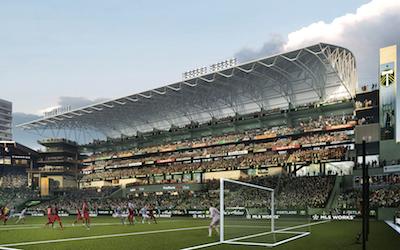 According to the team’s press release, the addition is modeled after a section of La Bombonera (“chocolate box”), the home of famed Buenos Aires club Boca Juniors that features a steep section jutting above the east sideline.

“We felt it was imperative to see how we could transform the stadium and add capacity to both meet the demand that we have for tickets and also position the club to be viable and competitive for years to come,” Timbers president of business Mike Golub said. “That has been the impetus for this process, which we hope is beginning to reach fruition.”

Allied Works Architecture, which is housed in offices just a few blocks from Providence Park, designed the expansion plan by which capacity will be expanded to about 25,000. The renovation would be conducted in two phases, with completion of all work projected in spring 2019, if the team is able to start construction this year in November or December. If not, the timetable would be pushed back a year, since very little work can be done while the Timbers and NWSL Thorns are playing games in the stadium.

Approval of the plan is needed from the City of Portland’s Design Commission, which will begin its review during a meeting May 11. The team will also need to revise the terms and agreements by which it leases and operates the stadium with the Portland City Council and secure permission to start the expansion project.

Several months of negotiations and public debate were needed in 2009 to obtain the agreements and permits necessary to upgrade the facility, then known as PG&E Park, for use as an MLS facility at an original cost of $31 million (later revised to $36 million).

The city borrowed $11.2 million from its own funds to help pay for that upgrade, Paulson and the team paid the balance.

Because no public money will be used for the expansion, and the team is funneling more game-day revenue to the city than was originally estimated -- and the Timbers have more or less captivated much of the populace -- much less resistance is anticipated this time around.