USA faces Mexico in Concacaf U-17 final with chance for first-ever U-17 and U-20 sweep.

In March, the Tab Ramos-coached USA won the Concacaf U-20 Championship. On Sunday, the USA has a chance to take the regional U-17 title for the first ever USA sweep of the two competitions when Coach John Hackworth’s team faces Mexico in the final in Panama.

On Friday, the USA beat Cuba, 6-2, to clinch a spot at the 2017 U-17 World Cup. The victory marked the USA’s fifth win in five games while outscoring its foes 19-5. One of the wins was a 4-3 victory over Mexico. El Tri reached the final thanks to a 6-1 victory over Costa Rica, which had been the only other undefeated team in the competition.

“We’re not done yet,” said Hackworth. “We want to win the championship. That’s what we came here to do. We wanted to first secure qualification. That was really important. But at the same time, we planned on being here for six games. We obviously rotated some players tonight and got some guys some rest.”

With the final coming up two days later, Hackworth replaced forwards Andrew Carleton and Josh Sargent at halftime while USA led, 3-1. Their replacements, Zyen Jones and Timothy Weah, both scored. 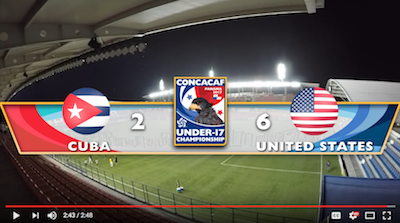 Cuba opened the second round with a 7-1 loss to Honduras, which the USA beat, 3-0. Only a loss to Cuba by five goals or more on Friday would have prevented the USA from qualifying.

The USA squandered a chance for an early lead when its leading scorer, Sargent, shot straight to Cuban keeper Danny Echeverria on a 12th-minute penalty kick after a foul on Carleton. It did take the lead three minutes later on a 23-yard free kick by Indiana Vassilev after Sargent was fouled.

The Cubans equalized when Brian Lavigne befuddled a trio of U.S. defenders before stroking the ball past U.S. keeper Justin Garces in the 19th minute.

Cuba’s Miguel Coll gifted the lead back to the USA when he ran on to an pass by Ayo Akinola and slammed it into his own net in the 37th minute. Carleton made it 3-1 in the 39th minute with a highlight-reel goal. Spotting that Echeverria had moved 10 yards off his line, Carleton hit the net with a chip from 25 yards. 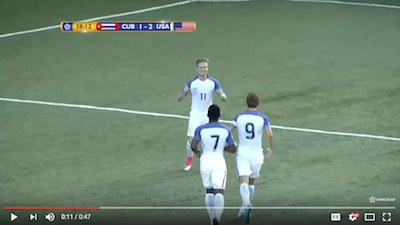 The USA enjoyed 68 percent of the first-half possession and took seven shots while Cuba’s only shot was the Lavigne strike.

The game’s second own goal went the other way, in the 47th minute when a Cuban corner kick deflected off the knee of U.S. central defender A.J. Vasquez. But two minutes later, the USA’s halftime subs combined to make it 4-2. Weah hit a hard low pass diagonally through the penalty area that Jones side-footed into the net at the far post. Bryan Reynolds made it 5-2 in the 83rd minute by finishing the rebound of Echeverria's save off a shot from Weah, who four minutes later scored the USA's sixth.

At the 2015 U-17 World Cup, Costa Rica reached the quarterfinals by beating France, the only team that had won all three of its group games, in a penalty-kick tiebreaker in the round of 16, then fell 1-0, to Belgium.

The Ticos qualified for the 2017 U-17 World Cup thanks to its 2-1 win over host Panama but they got thumped, 6-1, by two-time defending Concacaf champ Mexico.

Luis Olivas and Daniel Lopez each scored a pair of goals for El Tri. Lopez is the tournament's second leading scorer with six goals, one behind Honduras' Carlos Mejia's seven and one more than the five scored by the USA's Josh Sargent. 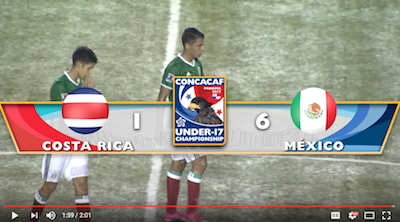