In the months before helping the USA qualify for the 2017 U-17 World Cup, striker Andrew Carleton and Christopher Goslin played their soccer with men. Both had signed Homegrown contracts with MLS’s Atlanta United last year and left the U-17 Residency Program in Bradenton, Florida, to train under Coach Tata Martino.

“They’re playing against seasoned pros like Michael Parkhurst, Kenwyne Jones, Miguel Almiron ...” says Atlanta United Academy Director Tony Annan, who coached Carleton and Goslin at Georgia United before it merged with the new MLS team. “They’re entrenched in the first team. They have their own locker in the first team dressing room.

“They’re competing with guys who play to feed their families, who make it difficult for them at training. It’s been really good for them and it’s really matured them. And Tata really likes them a lot.”

Carleton scored a brilliant goal – a firmly struck 25-yard chip -- in the USA’s 6-2 win over Cuba clinched a U-17 World Cup spot for the USA. Also golazo-worthy was his 18-yard volley in the Concacaf U-17 Championship final against Mexico, which prevailed in a penalty-kick shootout after the 1-1 tie. Carleton assisted on goals in the 3-0 win over Honduras and in the 4-3 first-round win over Mexico.

Goslin has been a key part of a U.S. midfield that dominated its opponents en route to the final.

Annon has coached Carleton and Goslin since they were 10.

“Andrew was the same as he is now,” says Annan. “He would try anything. He would try the trick that nobody else would do. He would stay behind after training and do more work than anybody else. He loved it.”

In the Honduras game, Carleton nearly scored after storming down field and evading two defenders with a spin move. Annan says Carleton watched lots of soccer to learn one-on-one tricks:

“He would watch. He would imitate. And he would practice. That’s Andrew. And he even came up with moves himself. Not many players will try the things he tries in big situations.” 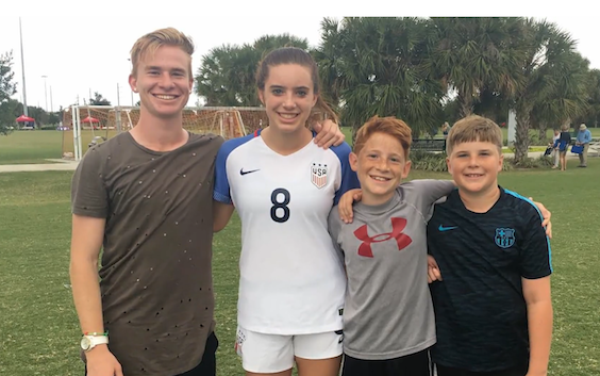 Carleton and Goslin were teammates on the 2015 U-16 Georgia United team that was the only non-MLS club to reach the semifinals of the U.S. Soccer Development Academy at either age group.

At a young age, Goslin stood out for his strength, power and quickness, says Annan. But when players progress to a higher level, more is required.

“And he became a really astute player,” says Annan. “Smart. Very composed. He could take over a game completely if he felt like it. When he’s in the mood, he’s the best player on the field. He’s a lovely passer of the ball. He can attack. He’s got blistering pace. He can get away from people. He can spray, he can control, he can keep it simple.” 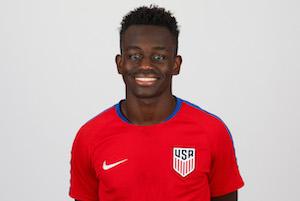 Jones scored both his goals in qualifying after bursting past his marker.

“Zyen is absolutely explosive power,” says Annan. “His first step, he’s at full pace. We did a little study on him at the club. Our sports science guy worked with the national team. And we discovered Zyen accelerates almost as quickly as DeAndre Yedlin.” 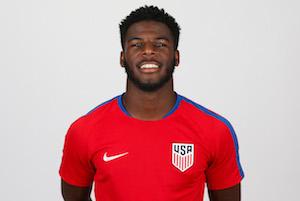 Georgia has produced stars before, such as Josh Wolff, Clint Mathis and Ricardo Clark. But the Atlanta area is now looking like a youth soccer hotbed.

Atlanta United’s George Bello and Danny Mangroave played on the U.S. U-15 national team that won the Torneo Delle Nazioni, in Italy and Slovenia in late April. In addition to Atlanta United’s U.S. U-17 players, Indiana Vassilev, who scored against Cuba, hails from Savannah, Georgia, was the one of the youngest players on the qualifying roster, one of three 2001s. And two Georgia-born Atlanta United academy players played for USA opponents at the Concacaf U-17 Championship: Jamaica defender Kendall Edwards and Honduras defender Alex Bahr.

Annan, who moved to the USA from the UK to play college soccer, has lived in Georgia for the past 22 years.

“It’s come so far so fast,” he says. “The club system has grown exponentially. In the last 10 years, folks have really come to grips with the professionalism of the game. Our program is being fed by very well organized clubs in Atlanta. There’s some really good leadership at the clubs. Good organization. Quality coaches. Good clubs work with us. You’re seeing the fruits of that labor.

“For me, I expected to it to happen and now it’s come to fruition. I’m hoping it continues.”