Mallory Pugh, who agreed to play for the Washington Spirit, is the first of what will be, in the short term, a select group of American players who turn pro in the NWSL after giving up their four years of college eligibility.

While the maximum salary of an NWSL player -- $41,700 in 2017 -- isn't enough to entice a player to give up a college scholarship, a young player of Pugh's ability good enough to get regular playing time on the national team is different.

She not only will earn an NWSL salary from U.S. Soccer as an allocated player but earn a national team salary -- plus benefits and bonuses. The kicker: Pugh signed an endorsement contract with Nike. 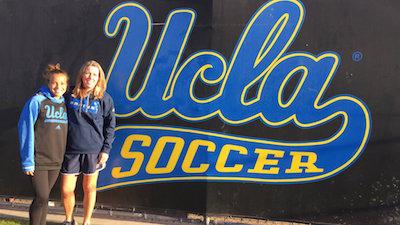 Pugh, who turned 19 years old on April 29, finished high school a year ago but sat out the fall semester at UCLA to play for the USA at the Under-20 World Cup. She has made 22 appearances and scored four goals for the USA since she received her first call-up in January 2016. She played for the USA at the 2016 Olympics in Brazil.

Pugh isn't the first American to skip college. Fellow Coloradan Lindsey Horan signed a six-figure contract with French club Paris St. Germain in 2012 instead of enrolling at the University of North America. There was no U.S. women's pro league in 2012. Horan joined the NWSL's Portland Thorns in 2016.

"I am very excited to begin my career in the NWSL and with the Washington Spirit," said Pugh. "Being part of a professional team will allow me to grow and develop as a player, and I look forward to helping the Spirit win championships."

There was much speculation the 2016 Olympian didn't want to play in Washington, but the Spirit acquired the first position in the NWSL Distribution Ranking Order via a series of offseason trades with Orlando and Boston and held on to that position.

"This is a monumental moment for our club and the NWSL,” said Spirit head coach and general manager Jim Gabarra. “We are extremely humbled and grateful for the opportunity to develop such a talented player. We look forward to having Mallory join the Spirit family."

Four players from the 2016 U.S. U-17 Women's World Cup team -- Jaelin Howell (Real Colorado), Sophia Smith (Real Colorado), Ashley Sanchez (So Cal Blues) and Brianna Pinto (CASL) -- have trained with the national team but none has been capped.

Pugh played -- and scored -- in a friendly against Ireland after her first camp.