Schalke 04, with its trio of U.S. teens Haji Wright, Nick Taitague and Weston McKennie, looked well poised to reach the U-19 Bundesliga final after winning the first leg of its semifinal series with Bayern Munich, 3-1, in Munich. But on Tuesday, Bayern rebounded with a 4-2 second-leg win, sending the game to a penalty kick tiebreaker that Schalke lost, 5-4.

The Bundesliga youth championship, which is televised in Germany and whose final last year in which Borussia Dortmund beat Hoffenheim drew a crowd 14,767, is considered prestigious to the point that Schalke’s run put the Americans out of contention to join the USA’s squad for the 2017 U-20 World Cup, which kicks off in South Korea on Saturday.

In the first leg, Wright scored Schalke’s third goal and Taitague drew the penalty kick for the second goal, after a pass from McKennie. In the second leg, before a crowd of 5,804, McKennie’s long throw-in set up the opening goal, a header by Benjamin Goller that gave Schalke a 1-0 halftime lead.

Bayern evened the game on aggregate with three goals in the second half within six minutes. Schalke regained the lead in the 78th minute when Wright’s chip was headed home by Luke Hemmerich in the 78th minute, but Mario Crnicki sent the game to PKs with an 88th goal.

Wright, the only American to take a spot kick, converted his shot but Jannis Kuebler had hit the crossbar while all Bayern players converted.

The scorer of Bayern’s first goal in the second half, Timothy Tillman, has been courted by U.S. Soccer. His father was a U.S. serviceman.

Borussia Dortmund, for whom American keeper Will Pulisic was on the bench, beat VfL Wolfsburg, 2-1, for a 5-3 aggregate win that sends it to the final against Bayern. Texan McKinze Gaines started and played 61 minutes for Wolfsburg.

Philadelphia Union defender Auston Trusty is replacing Fulham defender Marlon Fossey on Coach Tab Ramos’ 2017 U-20 World Cup team, which opens the tournament against Ecuador May 22 in Incheon, South Korea. Fossey was unable to recover from a groin injury in time for the competition. 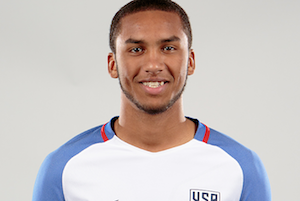 Trusty was a part of Ramos’ team that in March won the Concacaf U-20 Championship while qualifying for the World Cup. He also played in the 2015 U-17 World Cup.

A Pennsylvania product, Trusty signed an MLS Homegrown with the Philadelphia Union last year. He has yet to play an MLS game but has started six games this season at central defender for the Union’s USL affiliate Bethlehem Steel, for which he played 19 times in 2016.

The U.S. U-16 girls national team won the U-16 Development Tournament in Belgium with wins over Switzerland (2-1), Belgium (1-0) and Croatia (4-0). Tuesday’s win over Switzerland, in which South Shore Select’s Allyson Sentnor  scored and assisted, clinched the title for a U.S. team that was competing mostly against older players. 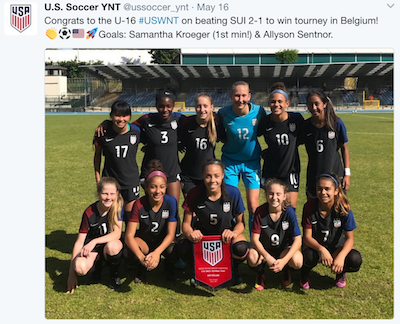 A 40-player U.S. U-17 girls national team squad is training under Coach Mark Carr May 14-21 in Lakewood Ranch, Florida. The squad includes 16 players who were part of the U-17s' championship win of the Torneo Femminile Delle Nazioni last month in Italy and Slovenia at which they beat Italy, 6-0, in the final.

Three players are in their second U-17 cycle: forward Jordan Canniff and defenders Kennedy Wesley and Kate Wiesner. Wesley and Wiesner captained the Torneo Femminile Delle Nazioni squad. All but three of the 40 players were born in 2001, the cutoff year for the 2018 U-17 Women’s World Cup in Uruguay.

Carr’s team will scrimmage against Tampa Bay United Hellenic of the WPSL on May 20.

The 26 players called in for the U-20s include midfielder Jaelin Howell and forward Sophia Smith, who both trained with the full U.S. national team in early April. The roster also includes Brianna Pinto, who was on the U.S. roster for the 2017 SheBelieves Cup but did not see action. All three played for the USA at the 2016 U-17 Women’s World Cup, as did five other players on the U-20 roster: goalkeeper Laurel Ivory, forward Civana Kuhlmann, forward Adrienne Richardson and defenders Isabel Rodriguez and Karina Rodriguez.