His scoreless streak now at 721 minutes, U.S. striker Bobby Wood continues to have the support of his Hamburg SV coach Markus Gisdol as HSV fights against relegation from the Bundesliga.

Before Hamburg SV’s 1-1 tie with Schalke 04 last Saturday, Gisdol was asked by a reporter whether he believed Wood, who’d been getting rock-bottom ratings in his last four games, would get out of his rut. 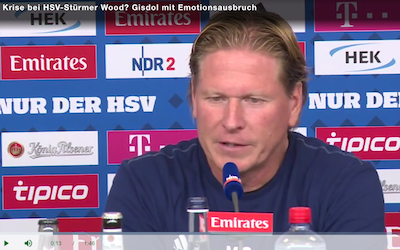 “I’m glad you asked me about Bobby Wood, because this gives me an opportunity to get something off my chest,” said Gisdol, before making an emotional defense of the 24-year-old who scored his last of five Bundesliga goals on March 12. “We have a player who exploded to a new level of performance this season. But who last season still played in the second division [with Union Berlin].

“And now he’s rated among the absolute top players and is expected to always deliver top performances. Bobby is a young guy who has a clear head but at this moment doesn’t have the consistency to bring these top performances over many weeks and months.

HSV has not specified what injury Wood is suffering from, but the German media has reported it concerns his knee. (“Bobby Wood: Knee kaput! Gisdol boils over” was the headline in the tabloid Sport Bild.)

“And then to criticize a playing who has been fighting so hard, that I can’t do,” Gisdol said. “Because I know what an important role he plays for our team. How exemplary his work ethic is. He may not have scored but he toiled for the team and in an extremely difficult game [a 0-0 tie with Mainz]. He made a great effort and will continue to do so in the next games. And when it matters, he’ll score the goals again.

“He made an amazing leap this season but one that isn’t stable yet. You can’t expect him to come out of the second division and alone rescue the team’s offense.”

With only 31 goals in 33 games, HSV is the Bundesliga's second-lowest scoring team, worse only than last-place Darmstadt, which has scored 26.

Against Schalke, Wood took four shots. He missed a chance to open the scoring for HSV in the 39th minute and in the 87th minute, Wood had the gamewinner on his foot with only keeper Ralf Fährmann to beat from close range, but shot wide.

“It was still a good effort from Bobby,” Gisdol said after the Schalke tie. “Strikers shouldn’t just be judged on goals, but also on the chances they get. That’s the first step to start scoring again. Sooner or later Bobby will hit the target for us. Of that I’m 100 percent sure.”

His next chance comes Saturday, when HSV hosts Wolfsburg, which sits two points above HSV. A win over the Wolves will save HSV, the club that prides itself as the only founding Bundesliga member never to have dropped to the second tier.

A tie or a loss will send HSV into a two-leg relegation-promotion playoff against the second division’s third-place finisher.