It’s a Sunday morning in Queens and Ben Boehm is smiling like a man about to spend a day doing what he really enjoys.

For Boehm, that’s being at the soccer field. When he was a boy, to play pickup games at Highland Park, he would walk a mile and half to save the bus fare for ice cream.

This morning, he’s driving to Juniper Valley Park to watch Blau-Weiss Gottschee’s 9- and 10-year-olds. His cane is propped up aside the parking brake and there’s a stack of papers folded into the car door slots. Those are field permits and game schedules for Gottschee’s 30 teams.

When he arrives at Juniper, Boehm greets all the BW Gottschee coaches, and shakes hands with the boys on the sideline -- before moving up to the stands to watch the side-by-side games against teams from New Jersey. 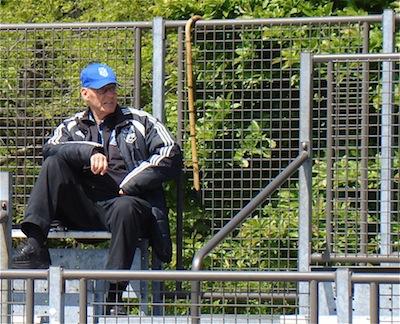 “He’s our consigliere,” says Gottschee 07 coach Miguel Brunengo. “Whenever we need advice, we go to Ben. Or as Paul calls him, Papa Ben.”

Paul McGlynn is Gottschee’s Director of Coaching, a position that Boehm held for decades, before it was an official title.

This year marks Boehm’s 50th year with BW Gottschee, which was founded in 1951 by Gottscheers, who hail from a German-speaking area in what is now Slovenia.

Boehm, not a Gottscheer, was born in Brooklyn in 1938. His parents had emigrated from Germany's Pflaz region, and at age 14 he started playing for Pfaelzer SC in the German-American Junior League, which later became the Cosmopolitan Junior Soccer League. 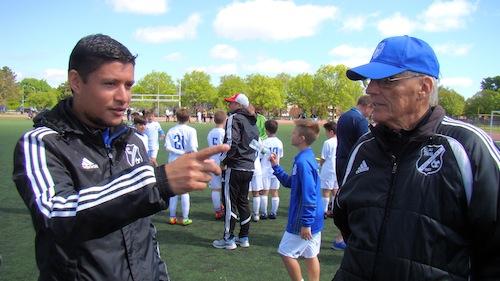 “Back then, we had seven or eight teams and there wasn’t a ‘Director of Coaching,’” he says. “It morphed into that. You had individual teams. The other clubs had this team and that team, and each team had no idea what everybody else was doing.

“We tried to make a connection between the teams from early on, up through the ranks. That’s what me and Martin Petschauer worked on.”

“This guy in New York City walks around with a cane,” said Mulroy, “and when he points it at a kid and says, ‘He’s a player,’ grab that kid, because Ben sees stuff other people don’t see.”

“He’s such a good guy for the game,” says Mulroy of Boehm. “He’s all about integrity. He’s all about what’s good for the kids. This is a club with no huge business model where they make money. They don’t give a shit about how much money you have and where you come from. Haitian or Ecuadoran? If you were a good human and you could play -- he pointed his cane at you.”

In the 1970s, the integration of Hispanic players met resistance from some of the club’s old-timers, but Boehm prevailed.

“When you come here, and you wear the blue shirt, in one week you’re Gottschee,” says Boehm.

When former Colombian World Cup player Wilmer Cabrera, currently the Houston Dynamo head coach, moved to the USA in 2003, he coached Gottschee’s U-16s before taking charge of the U.S. U-17 national team.

Gottschee stood out among the clubs that the U.S. Soccer Development Academy accepted when it launched in 2007. Most were suburban clubs that grew out of the late 20th century's youth soccer boom. It’s relatively small, not fielding more than two teams at the older age groups, but has managed to meet the financial challenges while competing against bigger clubs and fully-funded MLS academies.

Boehm doesn't complain that MLS academies lure away Gottschee players -- just another sign that Gottschee is doing it right with the young players that flock to the club. And it still competes impressively at the older age groups.

“It’s difficult to compete in the Development Academy, but compared to now, the first year was relatively simple,” says Boehm. “Now there are more and more mandates coming, as they should.”

Among those is the requirement of DA coaches to obtain high-level licenses, which require significant financial and time commitment. 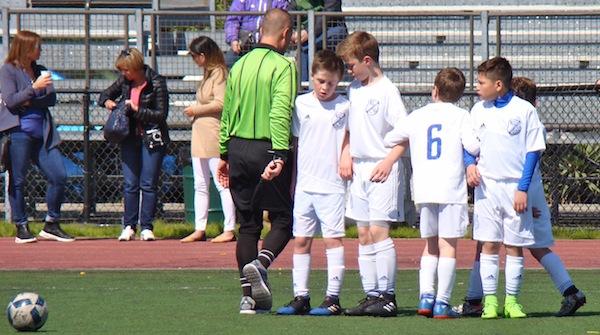 What does Boehm look for in a coach?

So when Boehm is in the stands watching the 9- and 10-year-olds play, he’s not concerned with the scoreline but whether they’re developing the skills and creativity that will make them successful in the long run – and play the kind of soccer he enjoys watching.

“Our style of play – I know you’ve probably heard this from clubs for years – they want to play an attractive possession style and all of this, but the truth is we actually do at every age group, starting at the youngest,” says McGlynn.

For Boehm, the recipe for that is also providing an environment with enough freedom to encourage creativity.

“You want, you need the freedom,” Boehm says. “From the early ages, and we tell that to the coaches, there’s got to be more free play. The real players will be the ones that are trained, but will be doing a lot of stuff on their own.

Gottschee makes a field available for its players of various ages to convene for free play.

“The kids are having a blast and this what you want and this how you learn,” he says. “Because they need to try and do things on their own.

“Nobody makes a player. Nobody creates a player. We want to create an environment that brings out what’s inside them.”

Boehm, at age 78, doesn’t run the club like he used to, and that’s fine with him.

“The real reward as far as I’m concerned is watching the younger guys,” says Boehm. “I’m at the field watching the training. I come out on days like today. It’s a more limited role but it’s enjoyable. As long as you’re on the field.”

Gottschee doesn’t have a full-time coaching staff, an office or its own complex. But the club that last year celebrated its 65th anniversary is going strong.

“Ben is the reason why we do what we do,” says McGlynn. “It’s very hard to say no to Ben. Ben has dedicated his life to the kids, to soccer. He really has been the driving force. He is the reason why the club has been relevant for so long.”