Hosted by South Korea, the U-20 World Cup games air in the USA in the middle of the night or very early in the morning. Based on the USA’s thrilling opener, fans should find it worth sacrificing sleep -- or at least making sure the DVR is programmed -- to follow the quest of Coach Tab Ramos' team.

The start, however, could hardly have been worse for the USA, which went down, 2-0, after seven minutes. The team that for the first time in history arrived at a U-20 World Cup as Concacaf champion looked like it was headed for an shellacking.

But the USA regained its composure, led by its youngest player, the 17-year-old Josh Sargent, whom Ramos added to the squad after he led the U.S. U-17s in scoring in its successful U-17 World Cup qualifying campaign last month.

Sargent scored in the 36th minute and equalized the game in the 54th. Ecuador pulled ahead again in the 64th minute. But in the fourth minute of stoppage time, Luca de la Torre slammed home a shot from 14 yards to earn the USA a 3-3 tie. 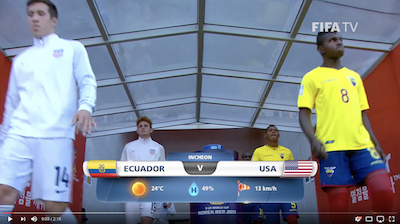 “To dig yourself out of this type of hole in a World Cup is not easy,” said Ramos. “Obviously, we have to give the team a lot of credit for that. I think the players did a great job.”

De la Torre, on the day before his 19th birthday, had also helped set up Sargent’s first goal.

“Obviously, we didn’t start well, so getting a point out of that game, after we gifted them two goals, is definitely a win for us in the end,” said De La Torre said. “We’re mentally strong. You can’t count us out of anything. It doesn’t matter if we’re 4-0 down, we’ll still have a chance of coming back.”

Scoreboard: U-20 World Cup
Under-20 World Cup: A U.S. tie that feels like a win By Paul Kennedy

The USA had also started poorly in qualifying, falling to a short-handed Panama, 1-0, in its opener and falling behind, 1-0, to Haiti in its second game before winning, 4-1, in the tournament that included the USA's 1-0 win over Mexico and a final win over Honduras on PKs after a scoreless tie.

“Obviously, our fight is always there, so we expect that,” Ramos said. “You’ve seen this team for the last year and a half and this team has a lot of character.

“We’re a high-press team. We like to come after teams. And, unfortunately, we made a couple of mistakes and we paid for that. Other than that, I’m very happy with the players and the team. It was a great effort.”

“The first 10 minutes … that wasn’t the plan. But I was not unhappy with the team. The adjustments at the end of the half were not many. There were a couple things that we wanted to do differently … to stretch out the field a little more, because we played inside too much.”

Central defenders Cameron Carter-Vickers, a starter at the 2015 U-20 World Cup, and Justen Glad, a starter in qualifying and with Real Salt Lake, came into the tournament recovering from injuries and sat out the Ecuador game while Tommy Redding was outrun by Washington Corozo on the first goal and beaten by Brayan Cabezas on the second while right back Aaron Herrera was too far upfield to help.

Also of concern was the play of goalkeeper Jonathan Klinsmann, who on the first goal fouled Corozo as he passed the ball to Herlin Lino with a studs-up slide. Had referee Björn Kuipers not played advantage, and deemed the tackle “serious foul play,” that could have a DOGSO red card.

The second goal beat Klinsmann at the near post, but it was a close-range rocket that may not have been savable. On the third goal, Herrera sent a back pass to Klinsmann, who while pressured from Wilter Ayovi and Joao Rojas, mis-kicked the ball to Cabezas for an easy finish.

Zack Steffen, now the Columbus Crew’s starting goalkeeper, played a major role in the USA’s 2015 World Cup run to the quarterfinals, where they fell to eventual champion Serbia on PKs following a scoreless tie. In the 1-0 round of 16 win over Colombia, Steffen made big-time saves and stopped a penalty kick.

Steffen, however, also had a dodgy start to the tournament, failing to reach a corner kick that gave Myanmar an early lead before the USA came back for a 2-1 win in the 2015 opener.

What does bode well for the USA, which faces Senegal on Thursday (7 a.m. ET, FS1, Telemundo En Vivo), is the attack, a concern for Ramos going into the tournament because he felt it didn’t finish enough of its chances in qualifying.

Sargent scored with a fierce shot from 12 yards despite creating an awkward bounce with his first touch. And he scored his second by dropping down to head precisely after meeting a cross from Brooks Lennon, who had also delivered the cross that led to the clearance that De La Torre pounced on for the tying goal.

"I think this first game is a good learning experience and I think we'll get better from here," said Ramos.

For an imperfect start, this one showed enough promise to expect a good showing from the USA at the 2017 U-20 World Cup.

Josh Sargent, the 17-year-old Missouri product who is still eligible for the U-17 World Cup, became the youngest U.S. player in history to score in a U-20 World Cup when he struck twice in Monday’s 3-3 tie with Ecuador. He broke the 10-year-old mark set by Jozy Altidore.

At the age of 18 and less than a year after he left the FC Dallas academy, Weston McKennie made his debut for German club Schalke 04 on Saturday, becoming the seventh youngest American to make his league debut in a major European league. 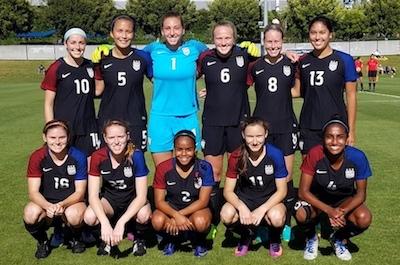 u.s. under-20 men's national team, under-20 world cup, youth, youth boys
10 comments about "An imperfect but promising start by USA at U-20 World Cup".
Read more comments >
Next story loading