Double-win weeks for the Chicago Fire and Philadelphia Union vaulted them up Soccer America's MLS Power Rankings, and a pair of road losses for Houston dropped it down the ladder.

In the top tier, Toronto FC held first place by earning a 1-1 tie at Red Bull Arena. A first loss of the season -- at home, no less -- nudged FC Dallas a slot lower, and Orlando City’s first defeat at home cost the Lions a few places.

This weekend the league plays its last full slate of games prior to the FIFA international dates in early June, during which MLS will play a reduced schedule.

The MLS Power Rankings are formulated by weighting recent results along with overall performance. They include a team’s current record in parentheses and rank last week.

1. TORONTO FC (7-1-5), 1. The six-game winning streak ended after a Benoit Cheyrou equalizer and two good chances to win it: Jozy Altidore’s penalty kick was saved and an offside call against Raheem Edwards nullified what would have been Tosiant Ricketts’ fourth goal in the last three games. TFC plays four straight at home before, during, and after the FIFA break. Despite callups it has a big chance to take control of the East.

2. NEW YORK CITY FC (6-4-2), 2. After faltering at altitude, NYCFC beat the heat in Orlando. David Villa tallied before and after Rodney Wallace snuck in to score at the back post. After the split NYCFC has accrued 10 points in seven road games, continuing its away success last year (7-7-3).

3. SPORTING KC (6-3-4), 4. SKC needed some fine saves by Tim Melia, who notched his seventh shutout, to dispatch Seattle as Gerso rolled up the seventh hat trick in team history. Dom Dwyer sat out the Vancouver game with an injury and subs Jimmy Medranda and Benny Feilhaber couldn’t ignite enough attacks. Still, SKC is looking like it can stay the course and challenge for a spot in the top two of the Western Conference.

4. FC DALLAS (5-1-4), 3. San Jose gets some credit for denying FCD a shot on goal until the 75th minute, yet such reliables such as Max Urruti just didn’t look sharp enough to contend with an inspired foe. Next up is a very tough test at Chicago.

5. CHICAGO (6-3-3), 9. Two more wins, both by shutout, with Nemanja Nikolic and David Accam sharing the four goals, has further burnished this new look sported by the Fire. Nikolic leads the league with 10 goals; he and Accam and their teammates have cast off any suspicion they would rely too much on Bastian Schweinsteiger. In the last four games he has one assist, yet the Fire has rolled 10s in points and goals. 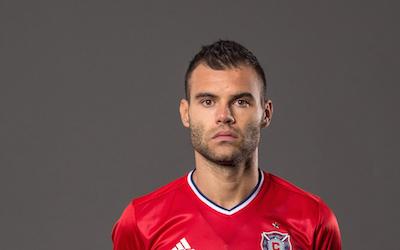 6. SAN JOSE (5-4-3), 10. Another late show, starring Wondo as goalscorer, got the point at home. In Big D, Jahmir Hyka sombreroed centerback Matt Hughes before tapping home the winner. If the Quakes, who had won only two of previous last eight games, can down the Galaxy at home this weekend, they have significantly altered course.

7. VANCOUVER (5-5-1), 11. The ‘Caps play Tuesday in the Canadian Championship, so used its rather low percentage of possession (41.7 percent) and the passing of Cristian Bolanos (two assists) to post its third win and second shutout in the last four games. Tim Parker’s first MLS goal -- in his 54th appearance – capped the victory.

8. PORTLAND (5-4-3), 6. Down to 10 men when Diego Chara was sent off for flinging his hand into the face of Ignacio Piatti, the Timbers extended their winless streak to four games and upped their goals-allowed total to 20. Until his dismissal in the 18th minute he’d been ever-present so far this season, a season that has gone a bit askew after a powerful start.

9. HOUSTON (6-5-1), 5. The Curse of the Road is confirmed. The Dynamo conceded two first-half goals in Philly and launched 24 crosses to no avail. In Atlanta, a storm delay of nearly an hour sparked a four-goal onslaught before Erick "Cubo” Torres converted a penalty kick in stoppage time. A 12th different lineup in 12 games included veteran DaMarcus Beasley up top at left wing.

10. COLUMBUS (6-6-1), 8. Sometimes in MLS, things happen fast. Two minutes after nailing a thunderous strike to open the scoring, Ola Kamara fluffed an excellent chance. Two minutes after his miss, Crew SC conceded a goal that was followed by another 10 minutes later. Here’s a disturbing stat: at least two goals allowed in five of the last six games. The play of centerback Jonathan Mensah may have improved somewhat but he’s anchoring a leaky defense.

11. ATLANTA UNITED (4-4-3), 13. There are hat tricks and then there are hat tricks. For the first of his MLS career, Miguel Alimiron lined two left-footed lasers high into the net and then went low from the penalty spot. Julian Gressel scored his second goal in as many games by deftly side-footing a loose ball into the bottom corner. Two more assists by Yamil Asad upped his count to five. Yeah, this team can come at you from a lot of directions.

12. PHILADELPHIA (4-4-4), 15. Speaking of count, that’s four -- count ‘em, four -- victories in a road for Philly, which got goals from Ilsinho in each game and had posted four straight shutouts prior to conceding a goal to Colorado. A great left-footed free kick by Haris Medunjanin for the winning goal against the Rapids punctuated his role in the team’s winning streak. He and Ilsinho are rising up the list of central midfield tandems and providing a solid spine for Fabian Herbers and Fafa Picault.

13. ORLANDO CITY (6-4-2), 7. The effort expended gaining a 1-1 tie at San Jose cost the Lions their first home loss of the season, and also extended their winless streak to five games, during they’ve conceded 12 goals. A nice first-time strike by Carlos Rivas from near the penalty spot gave the Lions a 1-0 lead it could not hold. NYCFC scored twice in the first half and when Cyle Larin hit a penalty kick against the post in the 64th minute hopes of a comeback died.

14. NEW ENGLAND (4-4-4), 14. The Revs needed just a few minutes to respond after falling behind and then struck again through Diego Fagundez, who registered just his second two-goal game in 164 league appearances. New England has won two in a row to stop the rot of a five-game winless skid, and this weekend takes its only regular-season trip to Red Bull Arena.

15. L.A. GALAXY (4-5-2), 18. This is it how it occasionally works in MLS: get a great goal (Giovani Dos Santos), solid goalkeeping (Brian Rowe), and a bit of luck (opposition own goal). Eight points in the past four games has edged the Galaxy to the edge of the playoff tier and sets up another great California Clasico Saturday in San Jose.

16. NY RED BULLS (5-6-2), 12. In an excellent game, NYRB halted a three-game losing streak but couldn’t parlay a superb overhead goal by Bradley Wright-Phillips and Luis Robles’ save of a penalty kick into a badly needed victory. It plays three straight on the road after hosting the Revs this weekend.

17. MONTREAL (3-4-4), 16. That was quick. A pair of goals by Ignacio Piatti enabled him to tie and pass Marco di Vaio as the team’s all-time leading scorer. His 35th and 36th goals were enough to secure the victory, though Kyle Fisher and Ambroise Oyongo also scored. The Impact has won three of the last six games after starting off without a victory in the first five games but is still four points out of the playoff tier.

18. SEATTLE (3-5-4), 17. The Sounders, plagued all season with shots off the woodwork, got a deflected goal by Harry Shipp and Stefan Frei notched his third shutout of the season. Brad Evans played 66 minutes at right back in his first start since late August. Just two victories in the past nine games isn’t much of a foundation to host Portland Saturday at CenturyLink in the first of three meetings this season.

19. REAL SALT LAKE (3-8-2), 22. Stung by a goal in the fourth minute, RSL snapped a four-game winning streak against NYCFC with a goal and assist by Albert Rusnak, who set up the winner for Aaron Maund with a corner kick after equalizing six minutes before halftime. RSL stayed with Seattle thanks to some Nick Rimando saves -– including a stop of a Clint Dempsey penalty kick -- but he could do nothing with Shipp’s deflected shot.

20. D.C UNITED (3-6-2), 19. A third straight loss – by shutout -- and another poor home performance prompted head coach Ben Olsen to call for replacements during the summer transfer window. The attack has been anemic – incredibly, United has been blanked in seven of its 11 games – and not even seven saves by Bill Hamid was enough.

21. MINNESOTA UNITED (3-7-2), 20. For the second week in a row, Christian Ramirez put the ball into his own net and this time it came 18 minutes after he’d scored the tying goal. Otherwise, only a golazo by Dos Santos got past keeper Bobby Shuttleworth, whose sharp work kept the Loons in the hunt.

22. COLORADO (2-8-1), 21. The dark forces enveloping Colorado turned on Caleb Calvert, who scored his first pro goal in the 15th minute and departed in the 69th after being cautioned twice: for arguing with the referee, then coming back onto the field without permission. You can’t make this stuff up.