Christian Pulisic become the first American in more than a decade to win a title for a club in Europe's big five leagues when Borussia Dortmund beat Timmy Chandler's Eintracht Frankfurt, 2-1, in the German Cup final in Berlin. Pulisic drew the penalty that decided the game.

Pulisic charged past Chandler down the left side of the penalty area to run on to Raphael Guerreiro's chip and after taking a touch of the ball was taken down by goalkeeper Lukas Hradecky, drawing his third penalty of the season. Pierre-Emerick Aubameyang  chipped a Panenka for the winning goal in the 67th minute. The win followed three straight seasons that ended with Dortmund losing in the German Cup final. 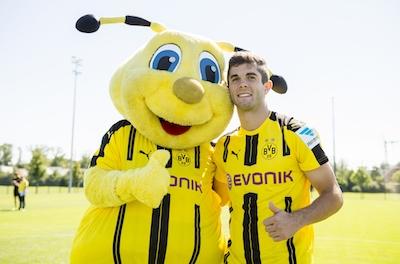 Pulisic, 18, is the youngest American to win a title for a club in Europe's big five leagues. Jovan Kirovski was 21 when he came on as a sub for Dortmund in its 2-0 win over Brazil's Cruzeiro in the 1997 Intercontinental Cup.

The only other American to win a German championship was German-born Thomas Dooley, who won the German Cup in 1990 and Bundesliga in 1991 before he joined the U.S. national team in 1992.

Paul Caligiuri won the East German league and cup titles with Hansa Rostock in 1991, the last season before the adoption of a united German league system.

INTERCONTINENTAL CUP
*Jovan Kirovski (Borussia Dortmund, 1997)
*Kirovski played for Borussia Dortmund during its 1996-97 UEFA Champions League campaign but did not play in the final.