An American coach's fairy-tale run to the EPL

Huddersfield Town was in 22nd place when Wagner was hired 18 months ago, but it will play in the EPL for the first time after beating Reading, 4-3, in a shootout in the League Championship playoff final.

The Wembley game is dubbed soccer's richest single game with a payday of a minimum of almost $220 million for the winner. 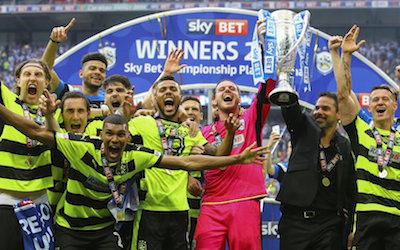 FROM TOP TO BOTTOM. Just three years ago, Huddersfield Town's revenues were less than $20 million as it languished in England's minor leagues since least playing in the old First Division in 1972.

It plummeted to the Fourth Division in just three seasons and spent five years at the bottom flight, quite a drop for the three-time English champion (1924-26). It's spent the last five seasons in the League Championship since winning a promotion playoff series in 2012.

KLOPP CONNECTION. Wagner, 45, is the son of an American father and German mother. He grew up grew up near Frankfurt, where he debuted for Eintracht Frankfurt in 1991. Wagner, a reserve when Schalke 04 won the 1997 UEFA Cup, played eight games for the USA in 1996-98 after German-American Thomas Dooley recommended another German-American, Michael Mason, and him to national team coach Steve Sampson.

Wagner spent four years as a coach at Borussia Dortmund, working under Juergen Klopp with whom he played at Mainz. He coached Dortmund II, working with Christian Pulisic in his first full season in Germany before taking the Huddersfield Town job in November 2015. He also coached Americans Terrence Boyd, Joseph Gyau and Junior Flores at Dortmund II.

'WHERE'S HUDDERSFIELD?' Huddersfield Town chairman Dean Hoyle said the goal wasn't simply avoiding relegation when he made Wagner his fourth manager in 15 months, but few Huddersfield fans believed Hoyle when he said the club had big plans. Wagner's wife had other concerns.

Wagner says the first thing his wife asked when Huddersfield Town offered him the job was, "Where's Huddersfield?" The town of 160,000 is located in West Yorkshire between Leeds and Manchester.

Huddersfield Town finished 19th in 2015-16, avoiding relegation by three spots, but climbed to fifth place this season, qualifying for the four-team promotion playoff despite its negative goal difference (56 goals scored, 58 goals conceded). It also beat Sheffield Wednesday in a shootout in the semifinals after their series ended 1-1.

'EXPERIENCE ISN'T EVERYTHING.' Wagner said his goal was to get players out of their comfort zone.

"We said as a group we wanted to leave our comfort zone, because if we weren't able to do that, we wouldn't be competitive," he said." I asked the players to do that so many times and they've got paid back for something they've invested in. We wanted to find new ways to be competitive. I'm so happy we've proved that experience isn't everything in England."

It's also a rich ending. Even if it finishes last in the EPL next season, Huddersfield is guaranteed a minimum of $121 million in television revenues and parachute payments of $96 million to ease its fall back to the League Championship. That's on top of any increase in ticket revenues or sponsorship income for playing in the EPL.

Huddersfield Town isn't worried about the former. It announced that any fan who has been a season-ticket holder since 2009 will only be charged 100 pounds -- $128 -- next season.