American Josh Sargent, who turned 17 in February, has put on a stunning display with three goals at the Under-20 World Cup in South Korea, where the USA will play New Zealand in the round of 16 on Thursday.

He is among the players who were born in 2000 and are already turning heads. Here are in alphabetical order 10 players to watch in the Class of 2000 ...

1. Jann-Fiete Arp (Germany). Hamburg averted relegation, easing worries about losing Arp, linked with Chelsea, Juventus and Borussia Dortmund, after he scored six goals in three games, including a 13-minute hat trick against Bosnia & Herzegovina, at the UEFA U-17 Championship.

2. Angel Gomes (England). Debuted for Manchester United in its final home game of the 2016-17 EPL season when manager Jose Mourinho rested his starters ahead of the Europa League final. Captains England's U-17s though was also eligible to play for Angola, where his father was born, and Portugal.

5. Josh Sargent (USA). Trained at Werder Bremen in January but so talented the German club's sporting director admits it will unlikely win Sargent's services if he holds out to sign with a European club when he turns 18 in February 2018. The pride of St. Louis is also eligible for the 2017 Under-17 World Cup in India and the 2019 Under-20 World Cup. 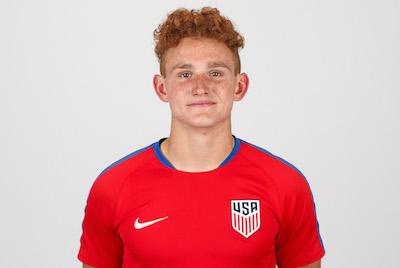 6. Ryan Sessegnon (England). Played 26 games and scored five goals from his left-back position for Fulham in England's League Championship in 2016-17. Should move to Premier League this summer with Tottenham tipped to sign him.

7. Alan Souza (Brazil). Scored a hat trick for Brazil in the final game of the South American U-17 Championship to go along with six assists during the tournament. The Palmeiras midfielder has a release clause of $20 million.

9. Jairo Torres (Mexico).  Named the best player at the Concacaf Under-17 Championship in May, six months after making his Liga MX debut for his hometown team, Atlas.

10. Vinicius Junior (Brazil). Will leave Flamengo for Real Madrid on a $55 million transfer when he turns 18 in July 2018. Named top player with seven goals for Brazil, winner of the 2017 South American U-17 Championship.