The Volkswagen club revs up with $22.5 million purchase of USA defender

When the USA returns to its World Cup qualifying campaign, it will have in its ranks a defender deemed worthy of a $22.5 million price tag. That’s what VfL Wolfsburg paid Hertha Berlin for 24-year-old John Brooks, who joins the Volkswagen-backed club after its most tumultuous Bundesliga season.


Brooks is leaving a Hertha team that he helped to a sixth-place finish and a spot in the Europa League to join a club in decline. VfL Wolfsburg barely survived a drop to the second division. It had finished in 16th place of the 18-team Bundesliga and maintained its top-tier status thanks to a nail-biting 2-0 aggregate a playoff series win over Eintracht Braunschweig. 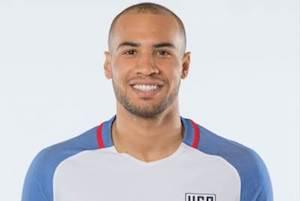 The signing of central defender Brooks came just three days after the 1-0 second-leg win over Braunschweig. Wolfsburg also announced it would keep on board Dutch coach Andries Jonker, who was hired in February to replace Valerien Ismael, who had replaced Dieter Hecking just four months earlier.

Disconcerting is just how quickly Wolfsburg descended. It had won the German Cup in 2015. In 2015-16, it finished eighth in the Bundesliga season and reached the quarterfinals of the UEFA Champions League, falling, 3-2, on aggregate to Real Madrid. Yet last season, after spending $89 million on players, it lost 17 of its 34 games and scored only 34 goals.

“Wolfsburg's relatively sustained period of recent success in the Bundesliga has evaporated over the course of this season,” wrote Hecko Flores of the Deutsche Welle.

Brooks, perhaps, was ready for a change of scenery. The Berlin native, born to an American father and German mother, had been with Hertha since age 14.

He’ll be moving from the metropolis of Berlin, a city of 3.6 million founded 800 years ago, to Wolfsburg, a city of 120,000 that was founded 80 years ago. Its proximity to the Mittellandkanal, with access to the Baltic Sea, deemed an optimal site for the Volkswagen factory. Today, more than half of the city’s residents work for Volkswagen.

Volkswagen, in fact, bankrolls the club that first won promotion to the Bundesliga for the 1997-98 season, when U.S. midfielder Claudio Reyna joined the club. Reyna spent two seasons with the club and helped it gain a foothold in the first division.

The car manufacturer’s funding enabled VfL to buy stars such Edin Dzeko and Grafite, who helped Wolfsburg win the 2009 Bundesliga title – the only season in the last 10 when German champ wasn’t Borussia Dortmund or Bayern Munich. In 2015, Wolfsburg finished runner-up, but at season’s end sold Belgian star Kevin De Bruyne to Manchester City for a reported $84 million and Ivan Perisic to Inter Milan for $22 million.

German 2014 World Cup winner Andre Schürrle joined Wolfsburg in February of 2015 and was sold to Borussia Dortmund in July of 2016.

“The disgruntled, transient player base this club has relied on in recent seasons has caused a great number of problems,” wrote DW’s Jonathan Harding. “Wolfsburg are a warning to Bundesliga sides who try to do too much too quickly and pay the price for it.”

The miserable 2016-17 season also had its off-field controversies as the club denied its women’s team a town square celebration for winning the German Cup/Frauen Bundesliga double, citing the men’s struggles.

Andries #Jonker: "It's a success that we've stayed in the league but it was the absolute minimum for the club." #ebswob pic.twitter.com/hKtwSHM0m8

Uncertain is how much of an affect the Volkswagen diesel emissions scandal has affected the club, although reports say it influenced the sales De Bruyne and Perisic. Young German star Julian Draxler was sold to Paris Saint-Germain last December for a reported $41 million. And shortly after the scandal broke, VfL scrapped plans for a $40 million youth academy.

But VW has pledged its support for the club.

"VfL Wolfsburg is a 100 percent subsidiary of Volkswagen, and Volkwagen doesn't let its subsidiaries fail," Francisco Javier Garcia Sanz, the chairman of Wolfsburg's supervisory board and member of Volkswagen's executive board said. “... Of course, it can’t go on like this, to fight against relegation every year.”

The acquisition of Brooks marked the first big move in Wolfsburg's revamping.

"A few things will have to change at the club, those responsible know that as well,” said Wolfsburg midfielder Daniel Didavi said. “Lots of mistakes were made. … And we need players who have the will to achieve. The possibilities in Wolfsburg are enormous and we finally have to make the most of them."

international, men's national team
1 comment about "The Volkswagen club revs up with $22.5 million purchase of USA defender".
Next story loading