What's this? A goalkeeper penalized for rough play?

Meet Sorin Stoica. Maybe you’ve seen him in action during MLS games. Not a highly paid or widely acclaimed player, though. A referee. A rather unusual referee, it seems.

On May 28, right at the end of the game between Vancouver and D.C. United, Stoica did what referees can hardly ever bring themselves to do. He called a penalty kick against a goalkeeper -- D.C. United’s Bill Hamid -- for charging violently into an opponent.

No doubt it is asking too much to expect other MLS referees to follow his lead by making similar calls, but Stoica has shown us that such calls can be made -- and the sky does not fall. 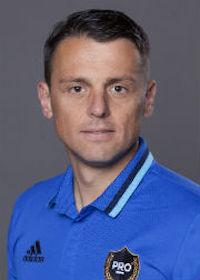 The incident happened in the final minutes of the game -- tense moments as Vancouver, losing 0-1, pressed for the tying goal. From the left flank Christian Bolanos delivered a 25-yard air-born free kick into the D.C. goal mouth. Brek Shea, all 6-foot-3 of him, rose to meet it, as goalkeeper Hamid raced out of his goal, also determined to get the ball. Shea got there first and got off a pretty good header that smacked on to the crossbar and rebounded into play.

Hamid arrived a fraction of a second too late. Clearly, he did not get the ball. Equally clearly, he did get Brek Shea. Leading with outstretched arms and with his right knee raised, he raced forward and jumped into Shea, hard.

The foul was blatant, ugly -- and obvious. The sort of foul that goalkeepers commit -- surely knowing that it is a dangerous foul, but also knowing that they are highly unlikely to be penalized.

For the moment, it looked as though this was business as usual. Stoica allowed play to continue for about 10 seconds, before whistling a halt. He took a brief look at Shea lying on the ground, then went to the sideline to talk to his AR, Jason White, who now becomes a key part of the drama.

It seems likely that White was concerned about the foul. The decision, of course, was Stoica’s. He made the right one, the almost unthinkable one: he called a foul against Hamid and gave a penalty kick to Vancouver. (For the record, Cristian Techera added to the tension by missing the kick in almost melodramatic style).

The Stoica/White duo got this one right. Stoica was willing to make the call, thus going against the SOP of a sport that has put up with this open thuggery for far too long.

Well, I’ll have to backtrack somewhat. Stoica -- quite possibly flustered by his own audacity in making such a revolutionary call -- did not complete the job.

He did not punish Hamid. There is, firstly, the matter of the call. What, exactly was Hamid’s offense?  It might have been “playing in a dangerous manner” -- but that would have meant an indirect free kick, not a penalty kick.

So, as Stoica did not give Hamid a card -- neither red nor yellow -- we must assume that he rated Hamid’s foul as merely “careless”. (Had he rated it as “reckless”, he would have been obliged to give a yellow card. Or a red card for using “excessive force.”). So we are left to guess what Stoica called. And the guess leads only to “careless” play - which is a ridiculous understatement of Hamid’s assault.

We are back to an old annoyance, one that I have banged on about before, many times. Why is it that soccer referees do not have an approved menu of official signals to let us know, immediately, what they have called? (There exists, in the current rulebook, a set of signals that is inadequate and, frankly, not all that helpful).

Why on earth does PRO boss Peter Walton not set up a committee to address this matter and draw up a list of signals? This is hardly quantum mechanics. It does not mean changing any rules, it does not need FIFA’s approval. In fact, if the system worked well, it would likely be adopted (after the obligatory 10-year delay for IFAB to check it out) by FIFA.

The USA -- where fans of pro sports are, rightly, accustomed to being informed what referees and umpires are up to -- is the perfect place to introduce such signals.

Why not, Peter Walton?

And a second query for Walton. Was Stoica’s brave call a result of any instruction or “emphasis” from PRO? It would be useful to know. Again, the fact that this is the USA is important. A highly litigious country. Head injuries are an issue now.

MLS could well be defusing a lot of potential trouble by telling PRO referees that they have to start penalizing goalkeepers for this type of foul. And, as with the system of referee signals ... no rule change is necessary.  The rules to deal with goalkeeper violence are already in the rulebook. They are, foolishly and dangerously, just not applied.