Besides super Pulisic, keep an eye on Yedlin and Villafana

What will Christian Pulisic  do next? That question alone makes every U.S. national team game something to look forward to.

Of course, there’s also the matter of qualifying for the 2018 World Cup, a quest that took on extra drama after the USA’s two-loss start to the Hexagonal under Coach Jurgen Klinsmann. 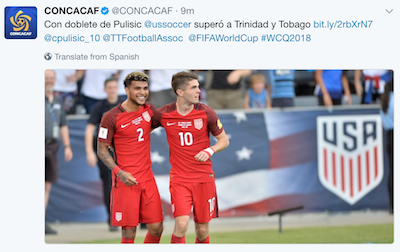 Since Bruce Arena took charge, the USA is back on track, thanks very much to the 18-year-old Pulisic, who scored both goals in Thursday’s 2-0 win over Trinidad & Tobago, assisted in the 1-1 tie at Panama, and scored in a 6-0 win over Honduras while contributing in various to degrees on the other five goals. (He also scored in a 1-1 friendly tie with Venezuela.)

On Sunday, we get to see the teenager, who’s already shone in Bundesliga and UEFA Champions League games for Borussia Dortmund, play at Azteca Stadium against Mexico.

A result in Mexico City is not crucial for the USA’s qualifying quest, thanks to the win over the T&T.

Against T&T, the USA faced a team that was bound to play defensively, clogging up the midfield and marking up tight on the USA’s strikers. The kind of game that calls for attack-minded outside backs. And the USA had them.

The 23-year-old DeAndre Yedlin, who played for Klinsmann at the 2014 World Cup, manned the right-back position. The 27-year-old Jorge Villafana made his debut under Arena in January as a sub in a friendly with Serbia and has started the last five games for the USA.

In the first half, the USA struggled to penetrate the T&T defense, but Villafana’s forays provided the most threats. 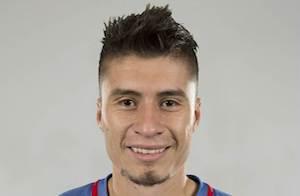 In the 35th minute, Villafana forced a diving save from Williams with a 26-yard shot, and followed up with a cross that Altidore headed on goal to be tipped over the crossbar by Williams. Villafana crossed again in the 40th minute, but less accurately and the ball was cleared.

Yedlin, who also attacked down the other flank in the first half, stepped it up in the second half.

He assisted on Pulisic’s first goal with a sharp low pass across the goalmouth. The buildup began in the U.S. half when Yedlin intercepted a long ball, feeding with his first touch Darlington Nagbe. He juked past Khaleem Hyland, stormed into the penalty area after a one-two with Clint Dempsey, before side-footing the ball back to Yedlin, who had smartly followed the play.

Yeldin also played a part in Pulisic’s second goal. After Geoff Cameron won the ball, he found Yedlin, in T&T’s half, and Yedlin played the ball to Altidore, who sent Pulisic on the way for a nine-yard shot into the net.

Against Mexico in Azteca Stadium, U.S. outside backs will be tested defensively much more than against the Soca Warriors.

Should Arena again start Yedlin and Villafana, that game will test them in a much more challenging environment than on Thursday.

Regardless, to succeed in the modern game, in which teams try to stifle their opponents by crowding the midfield, outside backs who can spark an offense are crucial to success. And so far, both Yedlin and Villafana look like they’ve got that talent.