The USA won its group at the 2017 U-20 World Cup and advanced to the quarterfinals, where Coach Tab Ramos’ team fell, 2-1, in overtime to the surprise team of the tournament, Venezuela, which won its first four games with shutouts and faces England in the final on Sunday.

The tournament in South Korea marked Ramos’ third U-20 World Cup at the helm and the USA is one of only two teams, along with Portugal, to reach the quarterfinals in 2015 and 2017.

We spoke with Ramos, who also serves as U.S. Soccer Youth Technical Director, about his team’s performance in South Korea, the U.S. Soccer Development Academy’s impact, and his coaching future.

SOCCER AMERICA: Now that you’ve some time to digest the run in South Korea, how do you assess the USA’s performance, pros and cons?

TAB RAMOS: Very happy with the team, their effort, the way we played and the progress that we made overall.

We built a team with confident players who were there to win the tournament. We fell short but could have won it.

I don't think that there were any negatives, but if I had to name something I'd say that Gedion Zelalem's injury was a big blow to the team as was Marlon Fossey’s injury the day before we arrived in Korea. In the end, these are opportunities for other players we selected, so that is a plus, and that's why they are there.

SA: How big an impact do you think it made that Venezuela had two extra days of rest?

TAB RAMOS: It helped them. Had it been three days for us and five for them, I don't think it would have affected us as much. Because it was two and four, just two days rest is difficult at this level where every play is maximum effort. We needed one more day regardless of how many they rested. 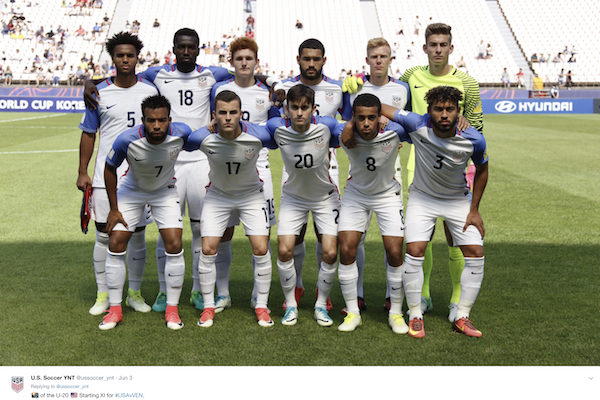 SA: How confident are you that players from this U.S. U-20 team will end up on the senior national team?

TAB RAMOS: Tons of potential, for sure, but you never know 100 percent. When you combine the last two U-20 cycles, it makes me feel extremely bullish about the future of our senior national team.

We are one of only two countries [along with Portugal] in the world to have made it to the quarterfinals the last two U-20 World Cups. The other two are not France, Argentina, Germany, Ghana, Brazil, England, Nigeria, Spain, Uruguay, Italy, Colombia, etc. They were missing players at the U-20 World Cups, but so were we.

SA: What was your impression of the overall quality of the tournament? Any revelations?

TAB RAMOS: It was an amazing tournament. Very nice to see England focused on their U-20s and Italy as well. They are not countries who normally do well. I enjoyed watching South Korea and thought Portugal and Uruguay were very good.

But the revelation is easy -- this Venezuela team was truly special. They had very good players in every position and considering the difficult situation that their country is in right now, how could anyone not root for them?

SA: The Development Academy is wrapping up its 10th season. How satisfied are with how it may have improved the national team program? Are we getting better players than before?

TAB RAMOS: All we have to do is look back at what soccer looked like without the DA. It was a free-for-all of soccer trophies, points and awards. The DA put the focus on training and the results are starting to be seen. Our players are better prepared.

MLS clubs have invested in youth development and other clubs outside of MLS have made a huge effort to do things the right way and follow along. I'm very thankful of MLS owners and youth club boards who are seeing the big picture.

SA: As U.S. Youth Technical Director, anything you’d like to address regarding the state of the U.S. youth game?

TAB RAMOS: I have been saying for a couple of years that we have good players in this country. Of course, we have to continue to get better but it's not the gloom and doom that some people who don't understand youth development have been vocal about. Those same people who thought just four months ago that we were not developing any players now criticize us for not making it to the final of the U-20 World Cup. That is crazy! How quickly things change!

SA: Now that you’ve taken the U-20s to three straight World Cups, what do you imagine might be next for you as a coach?

TAB RAMOS: What happens with me is not important. I will get a little time to think about that. What is important is that our program has changed for the better over the last four or five years. I am proud of the work that has been done, proud of wearing the crest every day and will always feel that U.S. Soccer is my home.