Michael Bradley joins the great ones

On any other field, Michael Bradley’s goal would still have been considered a work of art, but Azteca Stadium providing the canvas made it all the more magnificent.

Built 51 years ago, Azteca, the first stadium to stage two World Cup finals, has hosted some of the most famous games and goals in the history of the sport.

Brazil won its third World Cup in Azteca in 1970, a 4-1 win over Italy in which Pele scored on a header and the final goal by defender Carlos Alberto has been hailed as one of the greatest in World Cup history, a nine-player buildup leading to Pele, who rolled the ball into Carlos Alberto’s path for the emphatic finish.

During the 1986 World Cup, it was at Azteca where a 25-year-old Diego Maradona got the ball just inside Argentina’s half before spinning past and slaloming through the England defense to score the gamewinner. At the same World Cup, Mexico’s Manuel Negrete scored with a 16-yard flying scissor kick after an airborne one-two with Javier Aguirre.

The goals by Maradona and Negrete are commemorated with plaques at Azteca Stadium. 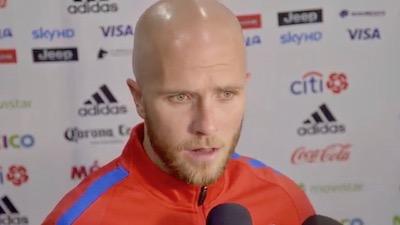 Michael Bradley: "I caught it nice."

Bradley may not be getting a plaque, but his goal will long be remembered by fans of both teams, and its video quickly went viral worldwide.

In Germany, where Bradley is remembered for his stint with Borussia Moenchengladbach, the headlines included “USA ties thanks to magical goal” and “Bradley scores dream goal against Mexico.”

From Italy, where Bradley played for Chievo and Roma: “The perfect shot from midfield by Bradley.” In England, the Express & Star dug up a photo from Bradley’s three-month loan stint in 2011 with Aston Villa to announce: “Former Aston Villa loanee Michael Bradley scores stunning chip for USA.” And from the Netherlands, where Bradley spent two seasons with Heerenveen, it was described as world-class, delicious and wonderful.

The Guardian’s Tom Dart wrote, “A piece of craftsmanship, imagination and beauty so perfect that a video replay should run on an endless loop in a permanent exhibition at the Metropolitan Museum of Art.”

The USA’s 1-1 tie -- Carlos Vela scored the equalizer 17 minutes later – marked the third time the Americans have picked up a point in a Mexico-hosted World Cup qualifier, after scoreless ties in 2013 and 1997. The Mexican media’s headline word of choice was muro (wall), a reference to the USA’s defensive play and an allusion to President Donald Trump’s promised border wall: “Slammed into the wall” … “U.S. wall puts breaks on El Tri” … “Hit the wall.” But even the Mexican accounts referred to the strike as the golazo that silenced Azteca. 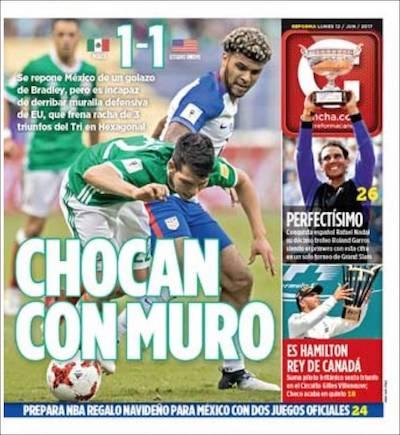 In the sixth minute, Hector Moreno passed the ball to Javier “Chicharito” Hernandez in the center circle and Bradley pounced on Hernandez's pass back toward Hector Herrera.

“We watched a lot of video with some of their movements,” Bradley said. “We knew that at certain moments, Chicharito was looking to come to the ball. I felt like I was able to read what he wanted to do and step in.”

Bradley’s left-footed first touch sent the ball past Herrera, and with his second touch he struck with his right foot from 41 yards.

“As I took the first touch, I saw [goalkeeper Guillermo] Ochoa pretty far off his line,” Bradley said. “You always know in this stadium if you can catch a ball clean, the thin air is really going to take it. I caught it nice.”

How Bradley read the play, how effectively and smoothly he moved, and how skillfully he shot ... led to the 1.8 seconds that the ball soared while you watched wondering whether it could actually land in the goal. 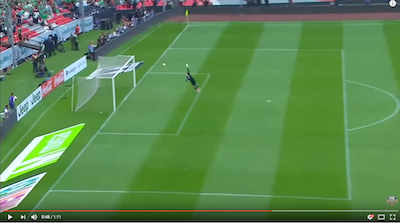 For only the sixth time in history had a U.S. player scored at Azteca. And this was the first time it came in a World Cup qualifier in which the USA got a point.

It was the 17th U.S. goal by Bradley, a midfielder, in 133 games for the USA. And he’s scored big ones before, in the World Cup, Gold Cup, Confederations Cup -- and he's now scored seven World Cup qualifying goals.

He's scored five times against Mexico, including both goals in the USA’s 2-0 win over Mexico in Columbus, Ohio, in a 2009 World Cup qualifier.

But to score like he did at Azteca, that puts him among the great ones.