For work in helping its community heal and recover from an attack on a local nightclub that left 49 people dead, Orlando City SC has been named winner of the 2017 Stuart Scott ENSPIRE Award. 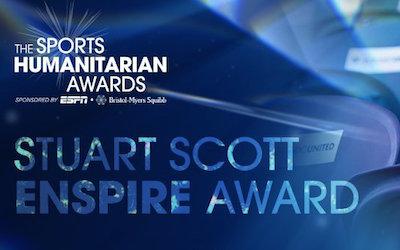 The team will be recognized next month at the third annual Sports Humanitarian of the Year Awards, which are sponsored by ESPN and Bristol-Myers Squibb.

“We are grateful and honored to be nominated and chosen for this award,” said Orlando City’s vice-president of community relations Kay Rawlins, who will accept the award. “This is one of the most important awards we could receive because it’s about the positive impact we could have in the community as an organization.”

Named after the ESPN commentator who died in 2015, the award recognizes programs and events implemented by the club last year in the wake of a mass shooting committed at the Pulse nightclub by Omar Mateen, a lone gunman who killed 49 people and injured 58 others before dying in a gun battle with police.

The nightclub patronized by the LBGTQ community was staging “Latin Night.” Shortly before 2 a.m. Mateen entered the club and shot dozens of people with two semiautomatic weapons.  After several hours of a standoff he was killed by police gunfire.

Six days after the attack, for a league match with San Jose at Camping World Stadium Orlando City held a pregame ceremony honoring families of the victims and first responders. Players wore #OrlandoUnited patches on their jersey, black armbands and rainbow wristbands, and the corner flags also featured rainbow colors. The game was halted in the 49th minute to observe a moment of silence. A section of seats at midfield was left unused, each occupied only by a balloon.

The team also honored the victims by installing seats of various colors in Section 12 of its new facility, Orlando City Stadium, which staged its first match in March. Orlando City SC raised $500,000 for the OneOrlando Fund last year and has continued to support fundraising efforts.

As honoree, the team will receive a $100,000 grant. It has decided to split the grant among the Better Together Fund, Contigo Fund, and OnePulse Foundation.