Where the VAR 'controversy' is misguided -- and where it isn't

The first thing to say about the Video Assistant Referee (VAR) system being used at the Confederations Cup in Russia is the calls upholding or overturning the decisions on the field so far have been correct.

And the Confederations Cup isn't the first time FIFA has tested VAR. It was used at the Under-20 World Cup, where decisions twice benefited the USA. One call disallowing a Senegal goal in its final group game against Portugal was the difference between the USA meeting New Zealand (which it beat 6-0) and Mexico in the round of 16. The second disallowing a Venezuela goal was the difference between the USA going into overtime and exiting after 90 minutes in its quarterfinal game.

And everyone should give the system the benefit of the doubt as Chile coach Juan Antonio Pizzi noted after La Roja's 2-0 win over Cameron on Sunday: "If I understand it correctly, we are trialing the system right now and there are maybe doubts because we are used to other situations in soccer. I think we have to wait and see and maybe as we start getting use to it, it will get better."

If anyone should have felt aggrieved by VAR, it was Chile, which had an apparent goal disallowed upon review by French VAR referee Clement Turpin.

Just before halftime, Eduardo Vargas scored and immediately celebrated with his teammates. On the Fox Sports replay, Aly Wagner confirmed that it was a goal, but what the television viewers did not know right away that the goal was being reviewed.

Sure enough, Slovenian referee Damir Skomina signaled the goal had been disallowed, which drew protests from the Chilean players -- and another replay that Wagner again said looked to show Vargas was onside. Joe Machnik, Fox Sports' referee analyst, soon thereafter said Vargas was offside and backed it up with a frozen image of the call. It was that close. 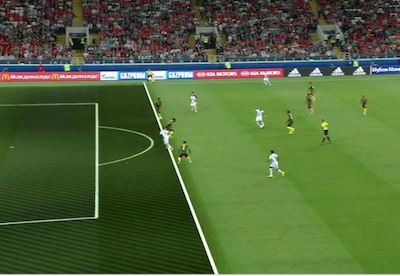 Late in the game, with Chile finally in the lead thanks to a goal by Arturo Vidal, Vargas scored again but the Chileans had to wait as Skomina signaled that the play was being reviewed. Fox Sports again went to the replay. This time, VAR confirmed the goal was valid, and the Chileans celebrated half-heartedly. The problem was, it was not entirely clear what part of the play was being reviewed.

But if you followed the game live on social media or the post-game reports, VAR was the worst thing that ever happened to soccer with headlines like "Vidal, Vargas help Chile defeat Cameroon amid VAR controversy" (ESPN FC) and "Confederations Cup, Chile beat Cameroon, VAR controversy" (Fox Sports Australia).

1. What are the situations in which VAR can be used?
2. Who decides whether to use VAR?
3. How decisive must the review be to change the original call?

Each is fraught with its own challenges.

1. The four circumstances the VAR referee can review a decision are only “game-changing” situations: goal, penalty/no penalty, direct red card/no direct red and mistaken identity. (Yellow cards are themselves not reviewable, so a yellow card that leads to a red card because it is the second yellow card isn't reviewable.)

3. The referee’s decision can only be changed if the video review shows the decision was clearly wrong. (Which brings up the issue of what is the definition of what is a "clear error." The goal Vargas had disallowed for offside is a perfect example of this. But for video replay, few people would have had any real problem with Skomina's original call.)

FIFA has a problem because it is an institution with far from a stellar reputation. Already there were calls to scrap further tests after so-called controversial VAR decisions at the Under-20 World Cup (red card to Italy U-20 defender Giuseppe Pezzella) and France-England friendly (red card to French defender Raphael Varane). Criticism has mounted since the Confederations Cup.

One complexity for the use of the VAR system is the complexity of its protocols. The IFAB web site lists a dozen "principles" alone surrounding VAR.

One of them is that the referee is not permitted to give "no decision" and refer the situation to the VAR. That was one of the issues with the Varane red card. Italian referee Davide Massa pulled out his yellow card but never issued it to Varane. Massa seemed to make the decision only after after referring it to the VAR referee, fellow Italian Marco Guida.

Another of the issues, as Machnik noted on the Chile-Cameroon telecast, is that Skomina seemed to wait for situations to play out, knowing VAR was available if necessary. It will take time to appreciate that how referees on the field manage a game and how their decisions are reviewed might now be different.

Just as it will take time to accept the fact there will be breaks in the game for reviews where there were none before for a sport whose selling point, for many, is that it flows with minimal stoppages. (One big problem so far at the Confederations is the time it's taken for reviews is much longer than FIFA envisioned.)

But an underlying problem soccer has remains -- indeed, will be accentuated by the VAR system. Soccer is a low-scoring sport.

1. That means moments to celebrate are few and far between, and they will be muted because of VAR, as we saw with the Chileans.

2. Because soccer is such a low-scoring sport, decisions made by referees are always magnified that much more. We've already seen VAR's impact at a supposedly minor tournament like the Confederations Cup. Just imagine how players and coaches and fans, in the stands or watching somewhere else, will react to calls at next year's World Cup -- if VAR is adopted -- even with the best VAR protocols and a better understanding of them.

One other thing can't be forgotten. VAR isn't some foolproof system, video replay implemented to correct the decision of the referee on the field. It is adding another referee into the decision-making process.

Soccer has a problem because its referees, right or wrong in their decisions, often become over-sized talking points afterward. With all good intentions, FIFA has just added to that as VAR referees like Turpin and Guida -- even American Jair Marrufo in Portugal-Mexico on Saturday -- have become new talking points.

VAR referees will join their colleagues on the field and take away even more from those who should be our focus for praise or criticism -- players and their coaches who pick them.

confederations cup, fifa, referees
13 comments about "Where the VAR 'controversy' is misguided -- and where it isn't".
Read more comments >
Next story loading