Hugo Arellano, the USA's captain at the 2015 U-17 World Cup who signed a Homegrown contract with the Los Angeles Galaxy in January of 2017 via the LA Galaxy II, made his MLS debut last weekend. The 19-year-old played the full 90 while filling in for suspended central defender Jelle Van Damme.

“I’ve debuted a lot of players in this league, a lot of young players over the years,” Galaxy coach Curt Onalfo told MLSSoccer.com. “I’ve seen players that look like deer in the headlights, and it’s overwhelming for them, and you need to give them a couple games before they can actually do it. He was not nervous about it. I’m sure he had nerves, but he didn’t show any nerves, and he just stepped in and did a real solid job.” 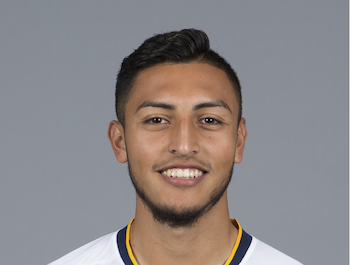 Arellano's debut means that six of the 18 field players on the USA's 2015 U-17 World Cup team have seen first-team action in a league play for a first division pro club.

From the current U.S. U-17 team that qualified for the 2017 U-17 World Cup by finishing runner-up at Concacaf U-17 Championship last month, Andrew Carleton made his MLS debut for Atlanta United with a four-minute appearance in a 4-1 win Houston.

James Sands became the seventh member of the current U.S. under-17 national team to turn pro when New York City FC made the central defender its first Homegrown signing. Sands, 16, will join the team on July 1 and divide his time with NYCFC and the U-17s as well as attend summer school.

Sands spent the MLS preseason with NYCFC before returning to the U-17s in residency in Bradenton, Florida. He started for the U-17s at the Concacaf Under-17 Championship, where they lost to Mexico in a shootout in the final. 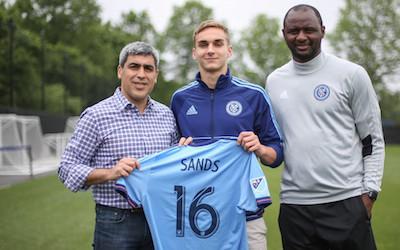 Sands played at New York Soccer Club from the age of 10 with his twin brother, Will, until he joined the NYCFC U16 academy in 2015. Both twins then entered the U-17 residency program.

“I’m really glad for James because he came with us on preseason and he did really well, showing us how good he is," said NYCFC coach Patrick Vieira. "He fully deserves this contract, he’s a young talent and now we have to help him to develop that talent."

Atlanta United signed Lagos Kunga, who represented the USA at the 2017 Under-20 World Cup, Patrick Okonkwo, another forward on its U-18 team, and 15-year George Bello to Homegrown contracts effective Jan. 1, 2018.

Atlanta United has one of the deepest player pools of any MLS club. It signed U.S. U-17 starters Carleton and Goslin in 2016.

Lagos was a last-minute addition to the U.S. U-20 team. He was born in Angola, and his family migrated to Russia before moving to Atlanta. He scored 10 goals in 21 appearances for the Atlanta United U-18s this season.

Okonkwo led the Atlanta United U-18s with 26 goals in 29 appearances, the third-highest production in all of USSDA for the U-18 age group.

Bello, a defender from Douglasville, Ga., plays for Atlanta United's U-16s. He is considered one of the top defenders in the youth national team program. In April, Bello started four games for the U.S. U-15s, who won the Torneo Delle Nazioni. 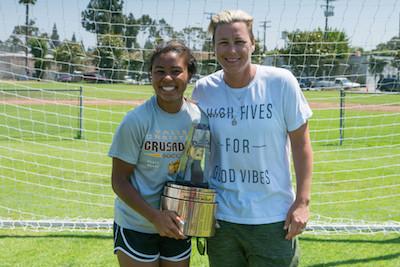 Wesley, as a sophomore this past season at Valley Christian High School, scored 22 goals and made nine assists. She plays ECNL ball the So Cal Blues. The 16-year-old has committed to attend Stanford in fall of 2019.

Last year’s winner, Ella Stevens, made 23 appearances for Duke during her freshman season for 2016. The 2015 winner Mallory Pugh, who played for the USA at the 2016 Olympics, left UCLA last month to sign with the NWSL’s Washington Spirit.