Mbappe and the allure of Real Madrid

The biggest transfer saga of the summer will be that of 18-year-old Monaco forward Kylian Mbappe, and it's now apparent that if he leaves the Mediterranean principality, where he has two years left on his contract with the Ligue 1 champions, it will only be for Real Madrid.

No club matches the prestige of the reigning European champions or has a better salesman to convince Mbappe to jump ship with two years left on his contract that Real Madrid coach Zinedine Zidane. 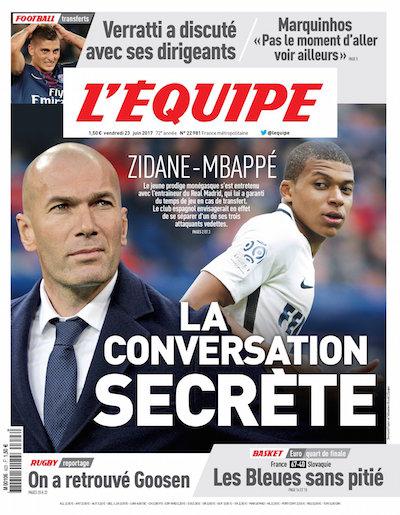 Just how influential Zidane is was evident in a photo L'Equipe found: Zidane with 5-year-old Mbappe at the French training center in Clairefontaine in 2004.

It reported that Mbappe -- in particular, Mbappe's father, Wilfried, who has been very protective of his son during his meteoric rise -- has downplayed the possibility of leaving Monaco for Real Madrid.

Their big concern: playing time on a star-studded team with Cristiano Ronaldo, Karim Benzema and Gareth Bale up front. That's a big issue in 2017-18 because the World Cup is coming up in Russia. Mbappe wants to be part of the French team but he'll need to be playing.

Despite a spectacular season with Monaco -- 26 goals in 43 games -- Mbappe has not yet nailed down a starting spot on the Bleus. Indeed, he only ranks eighth among French forwards in minutes played in the first six qualifiers -- a testament to their enormous depth up front.

For all the talk of Ronaldo wanting to leave Spain -- he faces tax problems with Spanish authorities -- that still remains a longshot. Benzema, the Frenchman, is going nowhere. But L'Equipe reported that Zidane told Mbappe he would get rid of one of his three forwards to make room for him and he assured him he'd play. The obvious choice to go: Bale.

Other clubs -- Arsenal, Liverpool, Manchester City, Paris St. Germain -- have expressed interest in Mbappe and been in contact with his father but none could offer what Real Madrid can give Mbappe: a chance to play for his favorite childhood team.

The other photo L'Equipe published was from 2014: Mbappe, then 14, in a Real Madrid uniform with Ronaldo.