The Gnat's Eyebrow and other VAR stupidities

The trial of video-assistance for referees currently under way at the Confederations Cup in Russia cannot be said to have cleared anything up. There remains a good deal of confusion.

There is a fundamental confusion between a video-review, and sheer technology, as in goal-line technology. GLT does away with human judgment altogether -- the decision is made by super-accurate (we are told, and must therefore believe) computers. There is no arguing with technology. A position I shall look at shortly.

But video reviews are still totally conducted by humans. With replay technology to help them out, for sure, but the decisions are still those of humans, and must therefore be open to question.

This raises a huge question for soccer. Maybe not for all sports that use VARs -- I wouldn’t know the details for them -- but for soccer there is an immediate and serious problem.

To wit: in deciding whether fouls are committed or goals are scored, soccer already operates using a skewed system. It cannot be doubted that the sport, through its rules and its referee interpretations, makes it as difficult as possible to score goals. Nor can there be any doubt that referees persistently under-call rough play -- fouls are not called, penalty kicks are not given, yellow cards are issued instead of reds.

In Russia, there are three referees sitting in the VAR booth, making decisions based on video evidence, including, of course, replays. But those referees will all, to a greater or lesser extent, share the failings listed above (and I do consider them serious failings).

Therefore, the referee’s skewed viewpoint is likely to be confirmed by the VAR panel. So a faulty decision is now backed up with “scientific” authenticity, when what is really happening is that an error -- the skewed pro-defense viewpoint -- is being bolstered.

We saw exactly this happen in the Russia-Mexico game, when the referee refused to call a penalty for Russia, and was supported by the VAR panel. To this viewer, this was a pretty clear foul, and I’m left totally baffled by the decision.

Bafflement turned into bewilderment during the Chile-Australia game. Alexis Sanchez was flattened in the penalty area by a clumsy challenge from Australian defender Mark Milligan (who did not get to the ball). No call. No VAR review (those guys must have been asleep).

Eight minutes later, the decision not to red-card Tim Cahill bordered on the scandalous. The referee got it wildly wrong by giving only a yellow for Cahill’s jumping-in, studs up assault on Charles Aranguiz, and then got the backing of the VAR panel. One wonders, were they reluctant to change a referee’s decision? But their silence was exactly the sort of non-decision to get VAR panels a bad name.

If all the VAR guys do is to confirm rotten referee calls, then far from improving the game, they will be severely damaging it.

There is surely a case to be made for the VAR panel to intervene when they are certain that the referee has missed a serious foul. There was such an incident, during the Russia-Mexico game. It occurred as Hirving Lozano scored Mexico’s winning goal.

Lozano chased a long ball to the edge of the Russian penalty area. Russian goalkeeper Igor Akinfeev was also racing to meet the ball, but found himself outside his area; but instead of playing the ball with his head, he tried to kick it. Lozano got his head on the ball first -- the header that scored the goal. But Akinfeev, with his wildly high kick, succeeded only in kicking Lozano solidly in the chest, and knocking him down. Lozano was all smiles, he could see that his header was entering the net, and he jumped up immediately to celebrate. 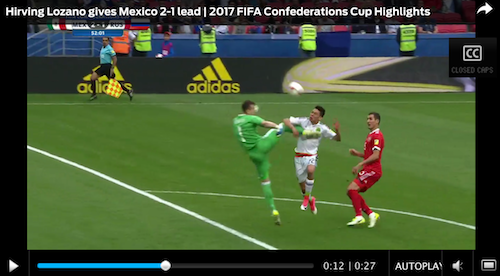 I suppose referee Fahad al Mirdasi can be forgiven, in all the excitement that followed, plus the fact that Lozano showed no signs of being injured, for overlooking, or maybe not even noticing, the foul.

But foul it was, a potentially dangerous one -- and it should have been called. It should have been noticed by the VAR panel. Why wasn’t it? There was plenty of time to inform the referee before play restarted. A foul that blatant, jumping into an opponent and solidly kicking him just below chin level while not making any contact with the ball is at least a yellow-card offense.

In short, the VAR panel, if it is to serve any useful purpose, must be as objective as possible. That rules out, obviously, favoring specific players or teams or coaches. But it must also rule out favoring defensive play, something that is far too widespread in today’s game. If any bias is to be evident in cases of doubt, that bias should favor the positive, creative side of the game -- the offense, not the defense.

There could hardly be a better example of the way in which VARs, plus technical assistance, can work in the wrong direction -- i.e. to promote negative soccer -- than what took place in the Chile-Cameroon game.

Chile scored what appeared to be a valid -- and very skillful -- goal in the closing minutes of the first half. Their fans cheered, the players celebrated, the score went up on the TV scoreboard, the TV commentators were in no doubt, they checked replays and said there was no offside.

But the VAR crew got involved, things were put on hold, then the referee signaled -- No goal. The Chile players, distraught, mobbed the referee, which they’re not supposed to do. But he, in turn, kept indicating his head set, evidently trying to explain that it was “him up there” who was making the decision.

More replays on TV showed a millimetric offside. A nose or a big toe, maybe. But it was definitely there. The goal was called back. A triumph for technology?  A step forward for soccer?

Not for me. Without the VAR intervention on this one, the goal would undoubtedly have been allowed. An excruciatingly close play, happening too quickly for humans to take in, would have left doubt -- and that doubt is now supposed to be resolved in favor of the attacking team. Hence, a goal.

But the VAR version, we must believe, can measure distances down to a gnat’s eyebrow and maybe even smaller. Boy, this is real, intricate, science, straight from the lab, so we must accept its conclusions and shut up.

There is also an element of hogwash involved. By now, we’ve all seen those marvelous images from GLT that show a ball apparently having crossed the goal line.  For sure all of it has. Not so, says GLT.  We can’t see it, but GLT’s sensitive instruments -- we are told -- show that 0.0001% of the ball is still not over the line. So no goal.

The gnat’s eyebrow again. This is just plain damn silly. And presenting it as irrefutable science doesn’t make it any less silly.

Soccer has only itself to blame for this situation. Its own rules seem determined to make it absurdly difficult to score a goal. Contrast with football, where if any part of the ball is over the line, it’s a touchdown. Why does soccer have to adopt the negative option? Why is it so determined to squelch the moments that are always the highlights of any game, indeed are the highlights of the sport itself?

A thorough review of the rules and of referee interpretations, with the aim of eradicating all the negative, pro-defense bias, must be the essential preliminary before science is called in to right the things that are -- undoubtedly -- wrong in the sport.