Key players on Germany’s Confederations Cup-winning team, such as Golden and Bronze Boot winners Timo Werner and Leon Goretzka, could have played in the concurrent U-21 European Championship. Yet Germany won that tournament as well.

On Sunday, Germany won the Confederations Cup final, 1-0, over two-time defending Copa America champion Chile -- within 48 hours of Germany winning the U-21 Euro title with a 1-0 win over Spain.

Chile’s starting lineup had a combined 944 caps; Germany’s 193, led by 23-year-old captain Julian Draxler, who now has made 35 national team appearances and won the Golden Ball at the Confederations Cup.

The average age of Germany’s starting lineup in Russia on Sunday was 24 and its roster, the youngest at the tournament, included only three players from its 2014 World Cup-winning roster and only six from its 2016 Euro semifinal team. 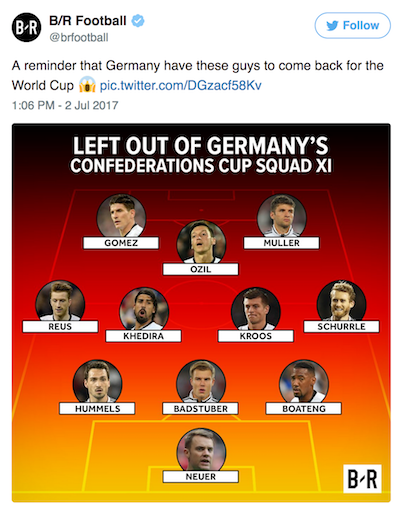 “The soccer fan’s heart bleeds when the world champion comes without its stars,” Sorokin said. “That’s why they come to the stadium.”

Loew defended his decision to bring a B team:

“Those players who played so many games reach their limit at one point. … I planned from the beginning to use the Confederations Cup to polish the younger players. ... After the World Cup title in 2014, we need to generate a new competitive situation. That motivates our world champions, Champions League winners and Bayern's many title-winning players. … In the end, if three or four players make the World Cup squad out of the Confed Cup, that is already a success."

Not only did Loew succeed providing experience to a new generation, Germany lifted the title. En route to the final, it beat Mexico, 4-1, in the semis after in group play beating Australia (3-2), tying Chile (1-1) and beating Cameroon (3-1). Portugal finished third thanks to a 2-1 overtime win over Mexico.

Among the Confederations Cup players, besides Werner and Goretzka, six others were eligible for the U-21 Euro, including Bayern Munich’s Joshua Kimmich, Liverpool’s Emre Can, Bayer Leverkusen’s Julian Brandt and Borussia Dortmund’s Matthias Ginter.

Before beating Spain in the U-21 final, Germany beat England in a PK shootout after a 2-2 tie in the semifinals. Goalkeeper Julian Pollersbeck, defenders Jeremy Toljan, Niklas Stark, Yannick Gerhardt and midfielders Maximilian Arnold and Max Meyer were named to the tournament Best XI.

Just how deep is Germany's talent pool? Manchester City winger Leroy Sane, a $50 million transfer from Schalke 04 in 2016, and Dortmund midfielder Julian Weigl, who's being courted by Barcelona and Real Madrid -- they are both 21 years old. They missed the Confederations Cup because of injury.