USA to face host India, Ghana and Colombia at U-17 World Cup

The top two finishers and the top four third-place finishers in each of the six four-team groups advance to the round of 16.

"Right now our team is chomping at the bit to get back into international completion because in our last experience, we walked away with a real sour taste in our mouth," said U.S. U-17 coach John Hackworth, whose team finished runner-up to Mexico at the Concacaf U-17 Championship in May, losing in the final on penalty kicks after a 1-1 tie.

The USA has qualified for all but one of the 17 U-17 World Cups, failing only in 2013. It finished fourth in 1999, with a team that included Landon Donovan, DaMarcus Beasley and Kyle Beckerman, but has failed to win a knockout-stage game since.

"This team has ambitions and the only way to satisfy some of those ambitions is to get back on the field and prove yourself once again," Hackworth said. "This is a fantastic opportunity for us. We are going to work very hard and very smart as we build toward the World Cup, but we are certainly excited about the chance."

The USA also drew the host in 2015. Then coached by Richie Williams, the USA, whose team included Christian Pulisic, played host Chile in its final group game and with a 4-1 loss was eliminated in the first round. It had opened with a 2-0 loss to eventual champion Nigeria and a 2-2 tie with Croatia. 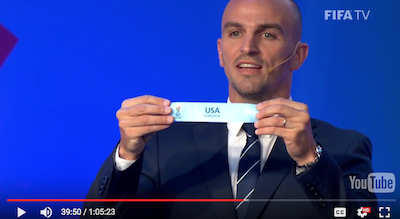 Former Argentina striker Esteban Cambiasso, who played in the 1995 U-17 World Cup
and the 2010 senior World Cup, drew the USA into Group A.

USA Opponents
INDIA
The tournament marks the first time India is hosting a FIFA tournament and India’s first appearance at a U-17 World Cup. The team is coached by Portugal’s Luis Norton de Matos. India’s U-17s fell, 4-0, to the USA when Coach John Hackworth’s team played five games in India in May of 2016. India’ U-17s have only once reached the second round of the Asian championship, reaching the quarterfinals 2002. India hosted the 2016 AFC U-16 Championship, losing to the United Arab Emirates (3-2) and Iran (3-0) and tying Saudi Arabia (3-3).

GHANA
The Black Starlets are ranked fifth all-time in U-17 World Cup play, behind Argentina (4), Mexico (3), Nigeria (2) and No. 1 Brazil. Ghana won the the U-17 World Cup in 1991 and 1995. They finished fourth in 2007 but failed to qualify for the next four World Cups before returning this year by finishing second to Mali at the 2017 Africa U-17 Cup of Nations.

COLOMBIA
Los Cafeteros last qualified for a U-17 World Cup in 2009, when they finished fourth. They also finished fourth in 2003. They qualified for this year’s tournament by finishing fourth behind champion Brazil, runner-up Chile and Paraguay. Colombia’s qualifying run included wins over Ecuador (twice), Uruguay and Paraguay. Colombia lost to Brazil, Chile and Bolivia, and tied Chile (in first round play) and Venezuela. 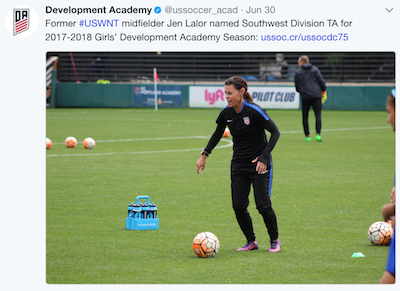 Technical Advisors, who serve under Academy Director Miriam Hickey, develop scouting networks comprised of U.S. Soccer scouts and collegiate coaches to help identify elite talent. The TAs will provide scouting reports and player data to the Director of Talent to identify players to be invited to Training Centers and the youth national team camps.

Lalor, who was WPSL Coach of the Year in 2013 when the San Diego Sea Lions won the title, has served as a youth national team assistant coach for five different age groups over the past two and half years and as the leader of the San Diego U.S. Soccer Girls' Training Center.

A native of Chula Vista, California, she played for the U.S. U-16 and U-20 national teams and was an all-American at Santa Clara University. She played 23 times for the USA, in 1992-95 and 2001. She was a member of the team that finished third at the 1995 Women's World Cup in Sweden.

Lalor also played professionally in the WUSA, and in Japan, Denmark and Sweden.

FC Dallas kept its hopes alive of winning three straight U-15/16 U.S. Soccer Development Academy championships by beating the Colorado Rapids, 5-0, in the quarterfinals. Jesus Ferreira, who on June 2 became the second youngest player to score an MLS goal when he struck in a 6-2 win over Real Salt Lake, scored a hat trick against the Rapids.

The 16-year-old Ferreira played on the FC Dallas frontline along with another Homegrown signing, Bryan Reynolds, and forward Brayan Padilla, who has scored 30 goals this DA season. Jalen James and Alex Bautista also scored for Dallas.

On trial with Hertha Berlin, U.S. U-20 goalkeeper Jonathan Klinsmann filled in at forward during a scrimmage and scored a volley golazo that made headlines around Germany, with comparisons to his father Jurgen Klinsmann's striker skills of yesteryear. Whether the 20-year-old, who spent the last two seasons at Cal Berkeley, will get a pro contract from Hertha will of course depend on his goalkeeper skills. Hertha goalkeeper coach Zsolt Petry  will assess Klinsmann during a July 7-14 training camp in Bad Saarow. 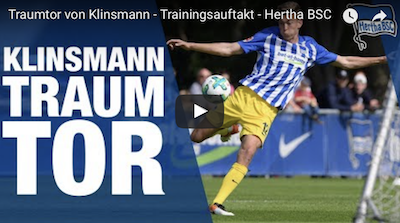