Neal Patterson, one of the principal owners of the group that bought the Kansas City Wizards and made Sporting Kansas City one of MLS's most successful franchises, died Sunday at the age of 67 after unexpected complications that arose following a recent recurrence of cancer.

Patterson was chairman and CEO of medical software firm Cerner Corporation, a major player in health care and huge employer in the Kansas City area. 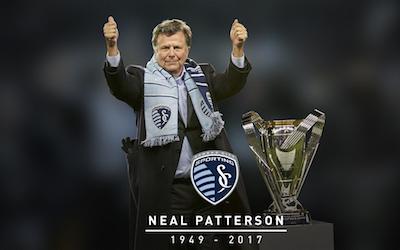 Cliff Illig, another of the principal investors in the five-person OnGoal LLC that purchased the MLS Kansas City team from Hunt Sports Group in 2006, was named chairman and interim CEO of Cerner, which he co-founded with Patterson 38 years ago.

Cerner, which took off when hospitals were required to digitize patient records, made Patterson a billionaire. Its revenues are projected to reach $5 billion this year.

The Wizards, original members of MLS, won MLS Cup 2000 but struggled to build support at Arrowhead Stadium. That has changed in the last decade.

Sporting KC built state-of-the-art Children’s Mercy Park at a cost of $200 million. It has a current streak of 97 straight MLS sell-outs at the stadium opened in 2011.

The National Training and Coaching Development Center, located a mile from Wyandotte Sporting Fields in  Kansas City, Kansas, which will open this winter.

“His commitment to the Kansas City Wizards in 2006 saved soccer in this city and paved the way for an incredible transformation that few could have envisioned at the time," said Reid. "Through his dedication to first-class facilities, community-driven initiatives and an unparalleled fan experience at Children’s Mercy Park, Sporting KC has blossomed into a crown jewel of Major League Soccer. He regularly celebrated the team’s success with his family and took great pride in all of his sports endeavors.”

"He was a brilliant entrepreneur who made community relations and philanthropy essential components of every business he owned," Garber said. "We extend our condolences to Neal’s family and friends, the Sporting Kansas City organization, and their fans.”