U.S. U-20 goalkeeper Jonathan Klinsmann, who spent the last two seasons at Cal Berkeley, has signed with German first division club Hertha Berlin. Klinsmann, the USA's starter during its quarterfinal run at the 2017 U-20 World Cup, had been on a 10-day trial with Hertha.

“Jonathan convinced us with his ability, charisma and ambition," said Hertha goalkeeper coach Zsoly Petry on the club's official web site. "He’ll now settle with us and develop step by step. Klinsmann exudes calmness and confidence. He has a very good right foot and is also technically and athletically at a good level.” 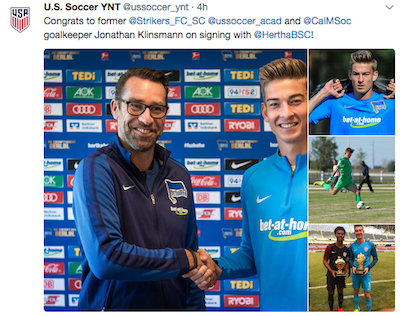 "It’s a big club, a Europa League participant, essentially a club that you’d like to play for and whose level you’d like to reach," Jonathan Klinsmann told Bundesliga.de. "To learn from Rune and Thomas and to play in the second team to get used to the level of play in the Bundesliga is a fantastic opportunity. It was a chance I had to take with both hands."

Klisnmann played youth ball for Southern California club Strikers FC before going to Cal, where he made 22 appearances in 2015-16.