In my last article, I wrote about some highs and lows in officiating thousands of soccer games. My game count is now above 9,950 so if I continue my current pace, barring a tragedy or serious injury, I would officiate my 10,000th game in the next couple of months.

I thought about what I should do for this milestone game. Should I invite rock band 10,000 Maniacs to sing the national anthem? Should the game be played in Minnesota, a state where I have never officiated but known by its slogan of the Land of 10,000 Lakes? No, I decided that this milestone game would simply be whatever I am assigned and I would treat this game like any other and not do anything special.

With one exception, as in commemoration of this milestone game, I have donated $10,000 to the U.S. Soccer Foundation, a dollar for every game that I have officiated. This is by far the most I have ever donated to any non-profit and, knowing that my 10,000th game would arrive one day God-willing, I was saving up money for years, particularly regarding money I give to non-profits, so I could make this donation. 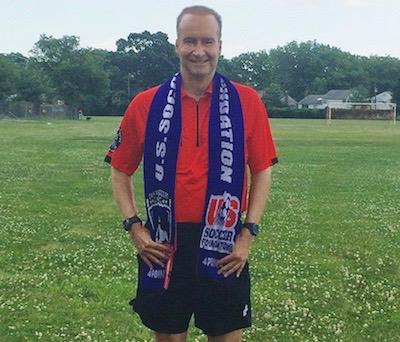 For those Soccer Americans not familiar with the U.S. Soccer Foundation, since its founding in the World Cup year of 1994, this non-profit organization has supported programs and field-building projects that provide youth in underserved communities with soccer programs that promote education, healthy lifestyles and leadership. Through its programs, the Foundation helps children succeed both on and off the field. The Foundation’s cost-effective, high-impact initiatives offer safe environments where kids and communities thrive by using soccer as a vehicle for social change. By increasing access to quality soccer programs and safe playing spaces to all kids, the Foundation is growing the game across the country.

It's quite likely that future U.S. national team players will grow up playing on fields funded by the U.S. Soccer Foundation.

While my $10,000 donation to the U.S. Soccer Foundation is nice, I see this wonderful organization receiving much more than this amount for my milestone game. Just as a person running a 5K or 10K race is looking for sponsors, I’m looking for Soccer Americans and others to help out, and see this more as a team effort. After all, my 10K was nearly four decades in the making and it’s a 10K for soccer fans.

Since I will have run tens of thousands of miles and traveled hundreds of thousands of miles in officiating what will soon be 10,000 games, I’m asking Soccer Americans to donate too. For all those who have enjoyed reading this referee column in Soccer America during the past several years, liked "Preventive Officiating" or had me officiate one of their games, I’m asking you to consider sending a tax-deductible donation made out to the U.S. Soccer Foundation, sending to U.S. Soccer Foundation, 1211 Connecticut Ave., NW, Suite 500, Washington, DC 20036, Re: Ref Randy 10K. Please put Ref Randy 10K in the memo section of the check so it can be tracked.

You can also donate through this fundraising page.

Your donation would help grow the game in the United States while serving as an invaluable weapon against gangs, drugs and obesity.

For those who donate $50 or more to the U.S. Soccer Foundation, I will gladly send a free, autographed copy of "Preventive Officiating" to your address. I’ll take your word for the donation as you need not send me proof and you can contact me about your donation by clicking HERE.

(Randy Vogt, the author of "Preventive Officiating," has officiated over 9,950 games with his milestone 10,000th game coming up. He has donated $10,000 -- a dollar for every game -- to the U.S. Soccer Foundation and he is asking Soccer Americans to consider making a contribution as well.)