USA beats a minnow: the woeful, good and hopeful

What was the most pathetic moment for the USA in its Gold Cup game on Wednesday? There were a few to choose from.

Goalkeeper Brad Guzan allowed a shot from 22 yards to roll under his arm as if he was dealing with a golf ball. The second goal the USA conceded came via a player laying on the ground.

On the other end, we saw Alejandro Bedoya, the most experienced U.S. player on the field, while completely unmarked, sky a volley over the crossbar from eight yards. And Paul Arriola hit the crossbar from six yards.

But the worst came when the USA ended the game -- with corner-flag time-wasting. That’s the cowardly tactic a team uses to run out the clock.

Gyasi Zardes got the ball on the left wing, 19 yards from the goal line. He dribbled quickly to the corner flag, shielding two defenders as long as he could before earning a throw-in. After settling the throw-in, Zardes went back to the time-wasting and won a corner kick.

Off the corner kick, he was joined by Bedoya and they did more of the same until referee Henry Bejarano blew the final whistle.

That is not how you want to see the USA finishing off a game against Martinique, a Caribbean island with a population of 390,000 that’s not even eligible for FIFA competitions because it’s a French department. (If you watched the beginning of the game, you heard "La Marseillaise.")

But Concacaf allows Martinique to play in the Gold Cup, and for the USA this should have been a game in which it was padding its Group B goal difference instead of defending a one-goal lead as the seconds ticked away.

For sure, going into a game in which you’re expected to rout a team that has nothing to lose often creates problems, and the USA failed to get a first-half goal.

But the first half did have a standout moment. In the 11th minute, Kellyn Acosta hit a low-flying free kick from the right flank that should not have created any danger because it came in behind Jordan Morris.

Yet Morris jumped back and managed a diving header that missed wide by inches. He had managed to create a scoring chance out of service that looked hopeless. More evidence that this 22-year-old has the potential to be a great goalscorer.

His next big chance, on a second-half breakaway off a superb defensive-splitting pass from Omar Gonzalez, Morris just failed to chip goalkeeper Kevin Olimpa.

When Morris got another chance, he nailed it, darting in front of Olimpa, who had his hands out ready scoop up Eric Lichaj's low cross, Morris nicked it into the goal.

That made it 2-0. Gonzalez having opened the scoring on a rebound off a fierce long-distance shot from Ariola that Olimpa could only parry.

Martinique’s goals in the 66th and 74th minutes made it 2-2, a scoreline that if it stood would have been one of the most embarrassing results in U.S. national team history. 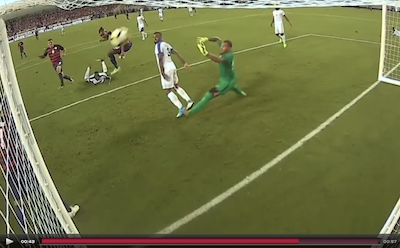 Yet the USA, so disjointed for much of the game, responded brilliantly within 90 seconds. At the end of a 10-pass sequence, Morris got a pass from Justin Morrow, charged downfield and delivered the ball to Zardes. Zardes sprinted into the penalty area and cut the ball back to Morris, who thumped it high into the net for the gamewinner.

Coach Bruce Arena had taken a risk by making eight changes from the Panama game, and going through with his plan to test the entire roster, which included newcomers and fringe players aiming to work their way back into the national team fold.

In the end, it worked out. The USA, which faces Nicaragua on Saturday in its final group game, edged ahead of Panama in the standings, thanks to the third goal. (Panama had beaten Nicaragua, 2-1, earlier in the day.)

Arena had kept Dom Dwyer, who scored against Panama and in his U.S. debut a week earlier in a 2-1 friendly against Ghana, on the bench, giving forward Juan Agudelo and Morris a chance on the frontline.

Against Nicaragua, we expect to see a Dwyer-Morris combo upfront -- and no need for time-wasting at the end of the game.