“I think every year the Development Academy is getting better and better,” Ramos said. “I think this year both finals could have been won by either team and they were both great games down to the last second. It was very exciting and very competitive, which is something we’ve been looking for — trying to make games more and more competitive.” 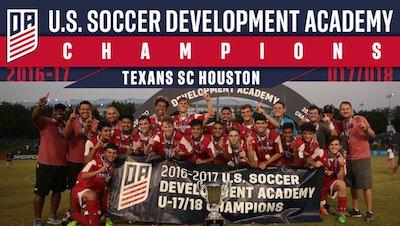 The Texans beat the Los Angeles Galaxy, 2-1, on goals by Christian Cappis and Omar Vasquez. The Houston club was the only non-MLS team to qualify for the final four at either age group and its victory marked the first by a non-pro club since New Jersey’s PDA claimed the U-17/18 title in 2014. Of the 20 champions in the first decade of DA play, 12 have been MLS clubs, and in the last five years, eight of the 10 winners have been MLS clubs.

The concern is whether amateur clubs can compete with well-funded pro clubs.

“I think it’s a great sign,” Ramos said of the win by the Texans, whose founders in 1983 included Roy Rees, who coached the USA at four U-17 World Cups, from 1987 through 1993. “Although I always try to be as thankful as possible for MLS for investing so much money into development, and they’re developing better and better players, I think it’s great that the non-MLS clubs are also doing a good job. And sometimes it requires winning and results for people to actually acknowledge that, so I’m very happy for the Texans club, but I’m very happy for all non-MLS clubs.”

The Galaxy, coached by Brian Kleiban, in the final started six U-16s and Efrain Alvarez, who turned 15 last month so is still U-14 eligible. Alvarez scored in the final and scored the first goal in the Galaxy’s 3-2 comeback semifinal win over the Seattle Sounders.

“They had a young team,” said Ramos. “A lot of the clubs who happen to have a lot of talent have different opportunities to use their players in such a way to benefit their development. And the Galaxy is one of those clubs that has a lot of talent among their younger players and they played quite a few young players in the final.

“It’s important for players [to play up]. It mirrors international competition. On the youth national team side, it seems in the past we haven’t been as prepared physically to match up against our international opponents, but I think now that some of our better players are getting opportunities to play up in the Development Academy age group, it prepares them a lot more.” 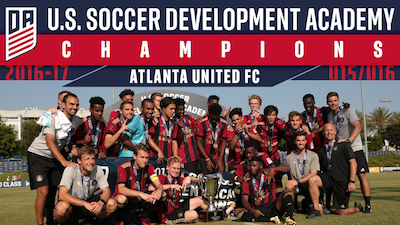 Atlanta United beat two-time defending champion FC Dallas in the U-15/16 final thanks to two goals by Andrew Carleton, who made his MLS debut this year. Atlanta United began MLS play this season but was able to field such a competitive DA team because it adopted Georgia United, which had been created with a merger of Georgia clubs United FA (which merged with Norcross SA), North Atlanta SA, Lanier SA and Southern Soccer Academy.

“The quality is improving,” Ramos said. “The other thing you notice, in this particular showcase, we had players playing who were already professional players. Atlanta United won the U-16 title and Carleton is already a professional player on the first team. That’s just one example.”

FC Dallas’ U-16 Jesus Ferreira has also already debuted in MLS. As many as 10 Galaxy DA players have already seen USL action with LA Galaxy II.

“This is something we weren’t seeing a few years ago,” Ramos said. “And there may be players missing, because they are already first-team MLS players. For example, [the New York Red Bulls’ 18-year-old] Tyler Adams has been a first-team player for a couple of years, so he doesn’t even participate in the Development Academy anymore. At some point you’re missing the top, top players because they’re already playing for the first team — and that’s a job well done by all the MLS teams.”

One of the biggest stars of the weekend, Alvarez, has been playing for Mexico’s national team program. Will he decide to change his mind come back to the U.S. national team?

“But I’m a very big believer that those decisions are not just about environment and they’re not just about national teams. They’re about feeling. ‘Do I feel like I want to represent the U.S.?' And I believe that’s something that’s not mentioned often enough.

“But there are always going to be players who will decide to play for Mexico because that’s who they identify with and I think all we can do, and we do this, is let them know everything we have to offer and how much we want them. But in the end, I value the cultural experiences that they get. And if a player identifies playing for Mexico, that’s a feeling. Something that we should respect.”