Jordan Canniff scores three for U.S. U-17 girls in China

Jordan Canniff, who is aiming to play in her second U-17 World Cup, scored three goals in the U-16 CFA International Women’s Youth Tournament in China, where Coach Mark Carr’s team fell to the host, 5-4, beat Japan, 2-0, and tied Canada, 1-1.

Cardiff, who turns 16 on July 27, played one game for the USA at the 2016 U-17 Women’s World Cup. Formerly of Richmond United's ECNL teams, she’ll be playing for the Washington Spirit-Baltimore Armour when the U.S. Soccer Girls Development Academy launches this fall. Set to graduate from high school in 2020, she has already committed to Penn State. 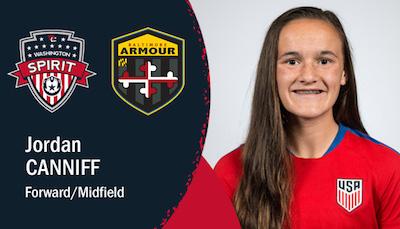 In the China tournament, Canniff scored twice against China, including a 59th minute goal that gave the USA a 4-3 lead. But the Chinese equalized in the 63rd minute and scored the gamewinner in the 90th minute. She scored the first goal in the win over Japan.

"Our trip to China provided us with many challenges in regards to travel and playing abroad, but also on the field, where we faced three different but talented opponents,” said Carr. “We had a mixed bag of results, but more importantly, I was proud of all the players, how we played and how we improved during the tournament. This experience will only help us move forward in our development journey. We know we have work to do and I know the players will focus improving themselves with their clubs ahead of our August camp."

Carr’s team is in the middle of the first year of a two-year cycle with the aim of qualifying for the 2018 U-17 Women’s World Cup in Uruguay.

In addition to, Canniff and defenders Kennedy Wesley and Kate Wiesner also played in the 2016 U-17 World Cup team.

More from Youth Soccer Reporter
This is your last free article! Special Offer: Unlimited access for 50¢!