Sporting Kansas City hit the jackpot in terms of allocation money, receiving upwards of $1.6 million from Orlando City for forward Dom Dwyer, whose 57 regular-season goals are the fourth-most in MLS since 2012.

The breakdown announced by the clubs is:

Only this year have MLS clubs started to release allocation figures included in trades, and the league record until now is believed to be the $650,000 in General Allocation Money Seattle received from D.C. United for Eddie Johnson in 2013 and Orlando City received from Minnesota United for Kevin Molinoin 2017. 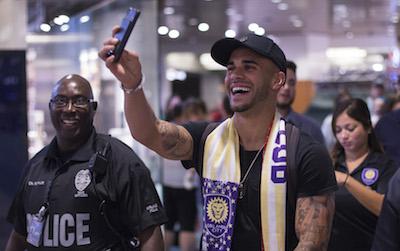 MLS clubs use General Allocation Money and Targeted Allocation Money in different ways -- the moneys can't be commingled -- to subsidize player signings and pay down their compensation to levels below Designated Player thresholds and get below the league's salary cap.

Why this deal stands out: Sporting KC was expected to get interest for the  Dwyer from European clubs because he'll be a free agent after the 2018 season and he holds a British passport.

While he has debuted for the USA in 2017, he might not otherwise have qualified for a work permit in England without his British passport. The figure of $1.6 million is in the range of what Sporting KC might get for the 26-year-old Dwyer from a European team in 2017.

Sporting KC can use all the allocation money from Orlando City as MLS currency while current MLS rules would allow it to use only a maximum of $650,000 in General Allocation Money acquired in a deal involving a transfer fee.

A team and the league share proceeds of a transfer with a team getting from 1/3 to 3/4 of the fee, depending on how the team acquired the player in the first place. Money over the maximum of $650,000 can be used in other ways -- development costs and Designated Player costs, money a team is spending above and beyond the costs of operating below a salary cap and with a maximum of three players earning the DP max.

Sporting KC manager Peter Vermes: "It is important to understand that when an organization is successful, individuals are going to be highly sought after by other clubs. Understandably, the salary cap world of sports does not enable you to keep everyone on your roster forever. So as the ever-changing and fluid roster continues to evolve, moves like this can occur."

The life we live is crazy but there's no one I'd rather do this crazy life with than you @Ddwyer14. #WelcomeHomeDom https://t.co/aw0C6PQ13M