Minnesota United FC has sold naming rights to its new soccer stadium, which will be known as Allianz Field after the German financial services company. It will be the eignth major facility Allianz has attached its name to, the most famous being Bayern Munich's Allianz Arena. 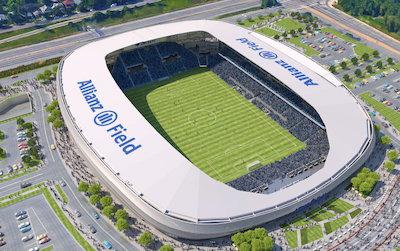 The stadium is being built in St. Paul, Minn., and will seat 19,400. It is scheduled to open for play in 2019 at a cost of $200 million. The Loons are playing their first two MLS seasons at the University of Minnesota's TCF Bank Stadium.

No fee for the multi-year agreement was announced. Allianz Life Insurance Co. of North America, Allianz’s U.S. subsidiary, is based in Golden Valley, Minn.. Minnesota United's jersey sponsor, Target, is headquartered in Minneapolis.