The youngest and the oldest players on the U.S. national team – and the head coach -- speak very similarly about captain Michael Bradley, who on Wednesday aims to lead the USA to the 2017 Gold Cup title.

“He’s a guy who not only works hard on the field, but also behind the scenes,” says 38-year-old Tim Howard. “He’s the epitome of a captain.” 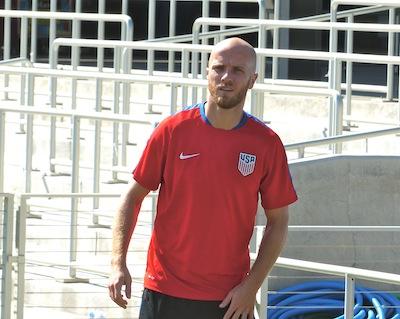 “He’s only ever thinking about the team, about soccer, and about how we can get better – each and every day, off the field, in training -- and part of being a good leader is going out on the field when the whistle blows and being accountable,” Howard says. “And he’s done that time and time again.”

Bradley was one of the veterans, along with Howard, Clint Dempsey and Jozy Altidore, whom Coach Bruce Arena brought into Gold Cup squad after testing newer players in the group stage.

“If you know Michael Bradley, you know everything’s important to Michael Bradley,” says Arena. “He’s a very serious professional. He makes my job easier because we have a very focused individual. A focused captain.”

For Bradley, this tournament has special meaning. In 2007, he started for the USA in the Gold Cup until he was suspended for its final victory over Mexico. He wasn’t part of the 2013 Gold Cup win. He’s played in two World Cups. He’s been part of two qualifying campaigns in which the USA finished first in Concacaf, but that isn’t celebrated with silverware. Last season his Toronto FC finished runner-up in MLS Cup. 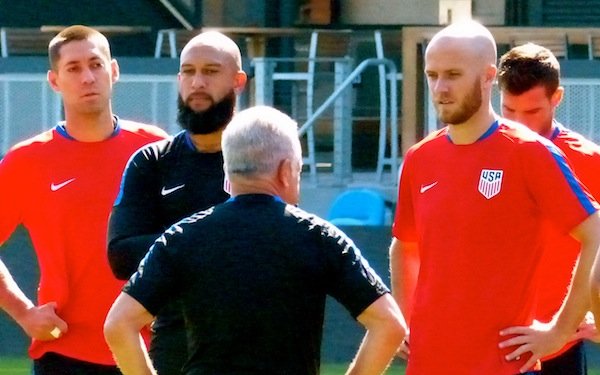 Against Jamaica, Bradley has a chance to lift a championship trophy. If the USA succeeds, it will be partly because Arena has integrated youngsters like 22-year-olds Paul Arriola and Kellyn Acosta into the team.

“He’s extremely easy to play with,” says Arriola. “He does everything right. Off the field, he’s a wonderful professional, a wonderful person. Easy to talk to, like a lot of the guys here.

“Michael has been one of the guys where when you come in, he just makes you feel comfortable. He knows how to communicate. And that’s a quality that’s very important. There are a lot of people these days who lack the communication skills – really knowing the people they’re communicating with, and Michael is the perfect man.”

Acosta, who turned 22 on Monday, started in midfielder alongside Bradley in last month’s 1-1 tie at Azteca Stadium in front of 71,000 fans.

“He makes me a better player,” says Acosta. “He wants to better the team in every which way possible. … He tells me, play how I do in Dallas. Keep it simple and don’t put too much pressure on myself.”

Arena says he’s especially impressed that Bradley, at his age, “continues to grow as a player.” And Arena has known Bradley for quite a while.

“I’ve known Michael since he’s a baby,” Arena said. “I probably saw him the week he was born.”

“He’s inherited a lot of his father’s qualities,” says Arena, who after his first stint as USA coach was succeeded by Bob Bradley. “He’s a very dedicated professional who understands a lot of things outside the lines, which has helped him as a player as well. He’s been terrific in that sense.”

Arena’s son, Kenny, now a U.S. national team assistant coach, played soccer on the beach with Michael when the families took annual vacations together and they reunited when they spent a season together with the MetroStars in 2004. Kenny is six years older.

Arriola also started in the Azteca game, when Bradley scored one of the greatest goals in U.S. national team history. 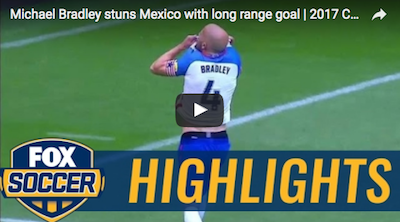 “He really brings us up when we’re down,” says Arriola. “And he can do things, like he did in Mexico. If there’s any other way to lead a team, he could do it.”

“You don’t get many of these opportunities in your career. We know that, and we have a group of guys who are excited and motivated.”