After the 2014 World Cup, Real Madrid spent $90 million for then 22-year-old Colombian James Rodriguez, who looked on track to becoming one of the world’s great playmakers. This season, he’ll be playing for Bayern Munich. 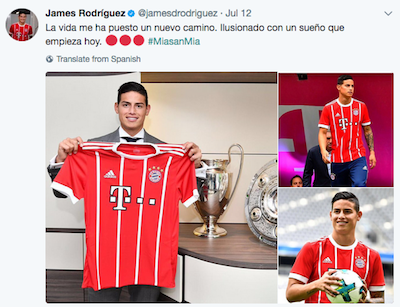 James had won the Golden Boot at the 2014 World Cup as Colombia reached the quarterfinals, where it fell to host Brazil.

In his first season, the Colombian appeared in 29 La Liga games, scoring 13 goals and setting up 13. But his role decreased year by year – affected to some degree by injuries picked up from frequent national team duty that included two Copa Americas and World Cup qualifying.

But he was healthy win Coach Zinedine Zidane left him out of the squad for Real Madrid’s for its 4-1 win over Juventus in the 2017 Champions League final.

In the past two seasons, he failed to match his first-season output, and now he’s been loaned to Bayern Munich, where he is reunited with his first Real Madrid coach, Carlo Ancelotti, under whom he had his best season at the Bernabeu.

James, who turned 26 this month, arrives on a two-year loan, Bayern paying Real Madrid $5.8 million per season, picking up his $9 million salary, with an option to buy out his contract, which goes through 2022, for $40 million.

The James acquisition has off-field benefits for the five-team Bundesliga defending champion. There’s the replica jersey income and the international branding.

It’s not about that, though, says Bayern chairman Karl-Heinz Rummenigge:

“We are very happy to pull off the deal for this transfer. The acquisition of James Rodriguez was the biggest wish of our coach Carlo Ancelotti, who after all worked successfully with him at Real Madrid. He is a versatile player. He can score and set up many goals, and without question raise the quality of the team.

For his part, James says he no regrets leaving the team he revered while a boy in Colombia.

“Bayern is a new dream for me,” said James, who becomes the club’s second Colombian player after Adolfo Valencia (1993-94). “I want to help the team improve and win titles. Munich is a beautiful city, a different culture and language. I will try to learn German.”

Although he may not have established himself as a Real Madrid great, James did deliver when saw action: 36 goals and 41 assists in the 111 competitive games he played.