Burned on an equalizer and robbed by a superb save, Jordan Morris found redemption in the best possible manner.

His shot into the top corner with just two minutes remaining in regulation time stunned Jamaica, 2-1, Wednesday to give the USA the 2017 Gold Cup title. It also capped off a series of displays one might thought weren't possible, given his struggles in MLS with Seattle in 2017.

With just two goals in 16 league games, a long way from the dozen he notched last year to win Rookie of the Year honors, Morris might well have been passed over for the Gold Cup by head coach Bruce Arena. But Morris scored a pair of vital goals in a 3-0 defeat of Martinique that enabled the Americans to top their group,  and given his second start of the knockout phase, rebounded from a defensive miscue to strike a dramatic winner his second good chance of the game.

"For me, it was just a sense of relief, trying to kind of make up for the mistake I made earlier," said Morris, whose third goal of the tournament made him the top U.S. scorer -- and tied for the tournament lead -- in his first Gold Cup. "It felt good that I could help the team come back."

Up until the final minutes, his first Gold Cup final had been memorable for the wrong reasons. He'd been victimized just after halftime on a Jamaican corner kick, when Je-Vaughn Watson evaded him at the back post to drill the tying goal past keeper Tim Howard.

"It definitely lingers around a little bit," said Morris of losing the mark on Watson, who pulled clear at the last second to reach an excellent serve by Kemar Lawrence. "To be honest, I've never had anything like that in my career where I was kind of at fault for the other team to score."

"You could see it on his face," he said. "That's part of what a team is all about. You could see it pissed him off, he was upset about it, but as I said he had enough about him to keep going. [He] scored a goal and now all that stuff means nothing. It's glory."

Fate threw another obstacle in his way before that glory could be savored.

Presented a chance to atone in the 73rd minute, Morris' blast toward the top corner was repelled by substitute keeper Dwayne Miller, who stepped up when starter Andre Blake was forced out of the match with a hand injury suffered during a scramble. Miller flew to his left to deflect Morris' rising shot and the U.S. forward held his hands to his face in disbelief. A game that could go either way was still 1-1.

Arena had already made one change, bringing in Morris' Seattle teammate Clint Dempsey, who took Morris' forward spot alongside goalscorer Jozy Altidore with Morris moving to left mid. A spectacular free kick by Altidore just before halftime had broken a 0-0 deadlock but rather than crumbling under that psychological blow, Jamaica replied five minutes into the second half with a goal their resilience and overall play deserved.

"We knew it was going to be a battle," said Morris of Jamaica, which prior to the final had conceded just two goals in five games. "They put eight guys behind the ball and made it very hard for us. For me, especially after that mistake it's tough sometimes but you just have to try and stay positive."

After Howard denied Darren Mattocks on the doorstep and Miller tipped a Dempsey shot onto the post, Arena brought on another sub, Gyasi Zardes, to run the right flank in place of Paul Arriola and still Jamaica held out. A Morris shot was blocked during a scramble and overtime seemed inevitable, until the energy supplied by Zardes provided one more opportunity.

Zardes got free down the right and centered a low ball that pinged off a crowd of players at just the right speed and angle for Morris to lash first-time with his right foot. Again, Miller reacted but this time the shot whistled past a few of this teammates and overpowered his desperate lunge.

The goal and the victory rounded off a nice trifecta of titles for a player who bypassed a pro contract to play another collegiate season at Stanford, which captured the NCAA Division I crown in 2015. In his first year as a pro, Seattle won the MLS Cup. For his latest triumph, he shook off a sophomore slump to join yet another team on the podium for a trophy presentation. 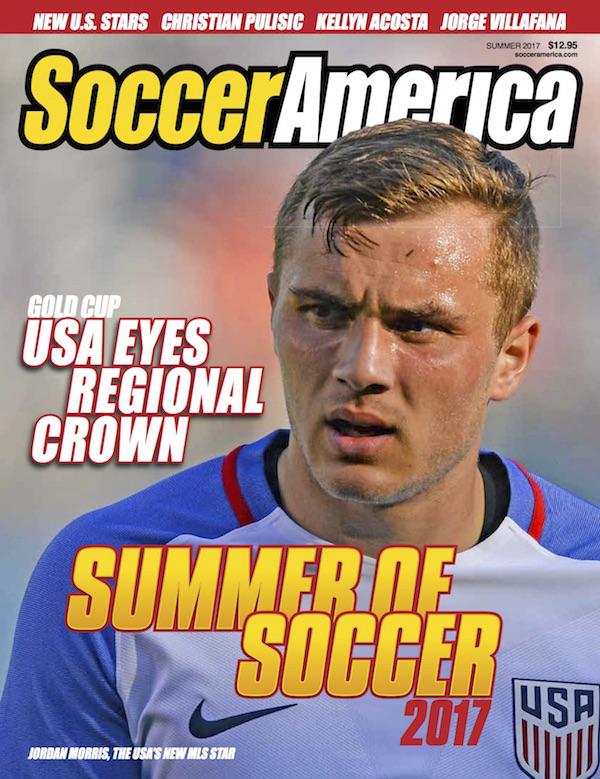 "That's how it goes sometimes," said Dempsey, sidelined by a heart ailment during the Sounders trophy run and now very much in the running for a spot on the 2018 World Cup squad. "Sometimes you can get a jumpstart with your club to help you with the national team, sometimes you can get vice versa, a jumpstart with the national team to help your club. He's come in, done a great job, scored a very big goal, and got another trophy, so we're happy."

As usual, the humble and modest Morris was full of praise and thanks for the support shown by the coaches and players.

"It was tough to get over, especially in such a big game, but my teammates were great," he said, "and I needed to just keep pushing forward and try to make a difference."