Get ready for the week of VAR in MLS

This is the big week MLS introduces the Video Assistant Referee system, VAR for short. MLS has been preparing for this for three years. It has explained the intricacies of VAR to coaches and players, and is working on educating media and fans as well. Bottom line: It's very complicated when you scratch the surface. Here are a dozen examples.

Jeff Agoos, the MLS vice president, competition, made a presentation to the media on the eve of the Gold Cup final in San Jose, explaining the ins and outs and subtleties of VAR, blowing away even Joe Machnik, Fox Sports' soccer refereeing expert. 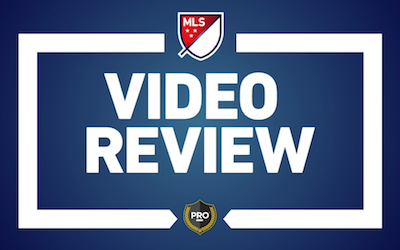 The protocol: VAR will correct “clear and obvious mistakes” in four areas and four areas only: goals scored, penalty kicks, red cards given or not given and mistaken identity.

1. VAR's dirty little secret. The net effect of VAR is it will take away goals -- which, for a sport that needs all the scoring it can get and all the excitement and celebration that accompany a goal, is a very troubling thing. VAR will review the play that leads up to a goal and nullify it if an attacking foul was committed that was not previously spotted. It won't go back and award the attacking team the ball if a foul led to an attack being broken up unless it involves one of the two buckets in which VAR has authority to review -- possible penalty kick or possible red card (specifically DOGSO situations).

2. VAR plays the whistle. Just as players are taught to play the whistle, VAR will play the whistle. If a goal is scored after a referee erroneously whistles an attacker for a foul or offside, VAR can't do anything about it -- no "goal" was ever scored. It can only correct the bad call and confirm the goal -- if the whistle blows after the ball crosses the goal line.

3. Referees will learn to delay their call, or will they? That rub -- working on not negating the review of a possible goal because the whistle came before the ball crossed the line -- requires that the referee (and his assistants) judiciously delay their calls when they see obvious goalscoring situations. But will they? That goes against their instructions not to change how they call a game.

4. VAR is only as good as the number of cameras or angles it has to work with. VAR is limited to looking at plays shown by the cameras the broadcasters are using -- and also the camera placements. Since the goal is to fix “clear and obvious mistakes," VAR won't overturn offside calls if there is no angle good enough to meet the “clear and obvious" standard.

5. Teams will quickly learn how to play the system. Generally, VAR can't be applied once play has restarted. We already saw it at the Confederations Cup: players instructed by their benches to restart play quickly if they think a play might go against them on review. And the reverse: hold up if they believe the referee needs time to get the message that a play might need to be changed.

8. The MLS disciplinary committee's role still needs to be determined. MLS's disciplinary committee acts, now after the fact, to clean up calls that should have been made during the game. VAR should have a big impact, making the right call -- in-game -- on red-card situations and eliminating the need for that crazy MLS statistic -- team that had most opposing players red carded after the fact and therefore was unfairly prevented from playing with extra men. The MLS disciplinary committee will still have to decide about adding additional games to automatic red-card suspensions. The only situation it might review a referee's decision after the fact -- the referee has the final say in any VAR situation during a game -- is if a missed call was "egregious" and would warrant a multiple-game suspension.

11. VAR will review multiple incidents in a sequence. VAR could determine that a disputed penalty was indeed a penalty -- but that penalty can be negated by a foul by the attacking team earlier in the play. VAR could determine a red card was committed for DOGSO but it is negated because the attacking player was offside. But a red card for serious foul play isn't negated by offside.

mls, referees
7 comments about "Get ready for the week of VAR in MLS".
Read more comments >
Next story loading