Thirteen years ago, Michael Orozco was one of the most talented young players in Southern California. The Los Angeles Galaxy invited the 18-year-old to training. Though Orozco impressed, he wasn’t ready for first team play on a squad full of seasoned veterans that in following year became 2005 MLS champs.

Back then, young MLS players not ripe enough for league play may have been able to train with the pros, but would not have gotten the competition crucial to their development.

Orozco went to Mexico’s San Luis, played for its reserve team for two years before debuting in Liga MX, where he has played for more than a decade, besides spending a season with the Philadelphia Union. He also played for the USA at the 2008 Olympics and during his full national team play is famous for scoring the gamewinner in the USA’s first and only win over El Tri on Mexican soil, in 2012.

Since the time when Orozco pursued a pro career after playing youth ball for the Irvine Strikers, MLS clubs ramped up their youth programs, fielding teams in the U.S. Soccer Development Academy that launched in 2007. But there remained a crucial missing rung in the ladder to the first team -- reserve teams that would enable young players to play with and against older, more experienced players.

That’s why one of the most important developments in American soccer has been MLS clubs fielding clubs in the 30-team USL. All 22 MLS teams either field USL teams or have USL affiliates.

On Tuesday, the LA Galaxy made history when it signed its Development Academy star, Efrain Alvarez, at age 15 the youngest signing in USL history. 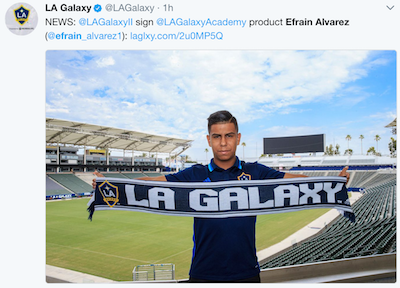 Another major benefit of MLS clubs fielding USL teams is that enables them to sign more young talent than they could under MLS roster rules (maximum of 28 players). And they can offer pro contracts to young players shopping themselves overseas.

Besides the players they’ve signed to USL pro contracts, the Galaxy, like other MLS teams, frequently give DA players USL playing time to give them early pro experience. Eight Galaxy players who played DA ball in the 2016-17 season also appeared in the USL.

The New York Red Bulls’ 18-year-old Tyler Adams is an example of the benefits of USL. Adams, who has started in 12 MLS games this season, played 11 USL games with Red Bulls II in 2015 and 21 in 2016, including in its 5-1 championship final win over Swope Park Rangers.

The Philadelphia Union’s 20-year-old Derrick Jones, who like Adams played for the USA at the U-20 World Cup, has appeared in 11 MLS games this season. In 2016, Jones played 26 games for Philadelphia’s USL affiliate Bethlehem Steel.

The Galaxy, a five-time MLS champion, is known for its highly paid stars such as Landon Donovan, David Beckham, Robbie Keane and Giovani dos Santos. But it has made a major commitment to developing homegrown talent, having aunched a high school education program for its academy players.

In a sport that can shop around the world for players, the odds are still against a local talent breaking through to the first team, but the USL component improves those odds significantly.

"I'm ready to take the next big step," said Efrain Alvarez upon signing for LA Galaxy II. His steps have already been big ones. Still eligible for U-14s during the 2016-17 Development Academy season, he starred for the Galaxy's runner-up U-18 team, scoring in the quarterfinals, semifinals and final as Coach Brian Kleiban's team finished runner-up to Texans SC Houston.

Alvarez turned 15 on June 19. Previously, the youngest players signed to USL pro contracts were Canadian Alphonso Davies, who signed with Vancouver Whitecaps 2 in February 2016 at 15 years, 3 months and 3 days old. Galaxy II keeper Eric Lopez, now the third youngest, signed in November 2014 when he was 15 years and 8 months old.

Alvarez scored four goals in three games for the U.S. U-15 national team on an April 2016 Argentina tour, but switched to Mexico and attended a Mexico U-15 training camp in September 2016 and last June joined Mexico’s U-15s at the Rimini Cup in Germany. He is currently training with Mexico’s U-15s at FMF’s national center.

ICE deports Bethesda SC star who was headed to college

Lizandro Claros Saravia, a 19-year-old former Bethesda SC Development Academy defender who was headed to play for Louisburg College in North Carolina on a soccer scholarship, was deported to his native El Salvador by the U.S. Immigration and Customs Enforcement (ICE). The Washington Post’s Rachel Chason reported on what happened in two articles: A soccer star from Gaithersburg won a college scholarship. But ICE plans to deport him. and He went to ICE to tell agents he had gotten into college. Now he and his brother have been deported.

U.S. U-18 women convene in Virginia