Goalkeeper Briana Scurry, who helped the USA win the 1999 World Cup and gold medals at the 1996 and 2004 Olympics, was elected to the National Soccer Hall of Fame on the Player Ballot and Joe Machnikwas elected on the Builder Ballot. 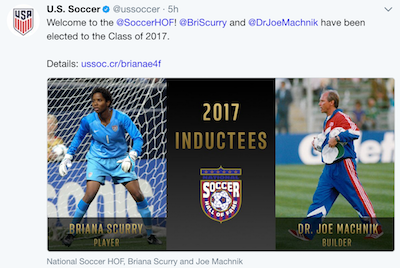 Scurry, who played 175 games for the USA in 1994-2008, famously saved the a spot kick against China in 1999 World Cup final, enabling Brandi Chastain to clinch the win. She played every minute in that tournament and both Olympic tournaments in which the USA won gold.

"It's a fantastic honor to be inducted to the Hall of Fame. I remember watching the Olympics on the couch with my parents at 8 years old, dreaming of becoming an Olympian myself,” Scurry said. “It was with their help -- and that of my coaches, teammates, and countless others -- that I was blessed to not only become an Olympian, but an Olympic and World Cup champion."

Machnik, currently a a broadcaster for FOX Sports, has been involved in American soccer as a referee, coach, instructor, game commissioner and player.

He served as assistant coach to Bob Gansler on the U.S. men’s national team that broke a 40-year drought when it qualified for the 1990 World Cup.

He served as MLS head of referees for 15 years as vice president, game operations. He also served as a FIFA and Concacaf game commissioner.

"To be recognized as a Builder of the sport that has captivated the passion of our country and has provided playing opportunities for millions of boys and girls and men and women is, indeed, an honor," said Machnik, who earned all-America honors as a goalkeeper at LIU-Brooklyn in 1962 and later served as coach of the University of New Haven. "I want to thank my teammates, the players I coached and officiated, the coaches and campers I taught, the referees I managed, my colleagues and friends in many soccer related projects and the broadcasters I now work with, who have made every moment in a 60-year career, a joy. Most of all, I would like to thank the extraordinary leaders who mentored my journey and my family who supported every step in what has been a charmed life in the sport that I love. I would like to thank all those who saw fit to honor my life in this way."

Machnik grew up in New York City. Scurry grew up in Dayton, Minnesota.