After Nashville SC and Fresno FC and likely Las Vegas in 2018, the USL is already beginning to line up its 2019 expansion field, beginning with Birmingham, which was confirmed on Tuesday. 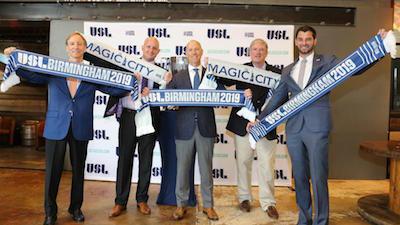 “Birmingham is an ideal market for USL,” said USL CEO Alec Papadakis, "clicking off all of the criteria we require in a new expansion market."

What they bring to table: The Barons are a big success story in Birmingham, the top drawing team in the Double-A Southern League. All three owners have backgrounds in the sports industry.

First hire: Morgan Copes -- co-founder of the NPSL Birmingham Hammers -- will serve as vice president and be the main point of contact of the USL team (name TBD).

How it all came together: “The momentum for a professional soccer team in Birmingham all started with a couple of good buddies and a few beers," says Copes. "To now have a USL team here is amazing — I still have to tell people to ‘pinch me’ because it doesn’t feel real. In addition to the Hammers, Birmingham soccer fans’ enthusiastic support was just as, if not more, important, and they are now being rewarded for those efforts.”

Big unknown: The USL team will grow out of the Hammers, who play in nearby Vestavia Hills, but it wants to find a downtown home. The criteria is "in or near the center of the city" and with "walkable amenities nearby," says Copes.