Crew's Gregg Berhalter: 'The whole group needs to step up'

A few days after a disappointing defeat in San Jose, Crew SC is pointing toward the remainder of the season with a new player on the books.

The team has signed Portuguese winger Pedro Santos as a Designated Player, which fills out the allotted three DP slots for the first time in team history and replaces Ethan Finlay, who was traded to Minnesota United on Wednesday. Those slots might be in flux rather soon; last week, playmaker Federico Higuain, whose contract expires at the end of the season, talked about possibly moving on, and defender Jonathan Mensah’s debut season in MLS has been marred by poor displays.

Though head coach Gregg Berhaltercites defensive breakdowns as his team’s most glaring problems, he’s also been concerned about its failure to convert scoring chances at a higher rate. He says problems at both ends of the field cropped up all too often in the 2-1 loss at Avaya Stadium. 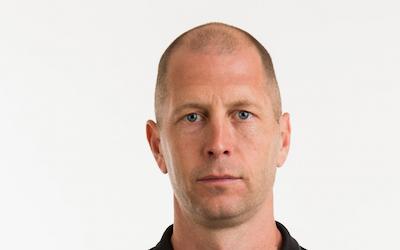 “I wasn’t happy with this game,” said Berhalter of the defeat that dropped its overall record to 10-12-2 and road mark to 3-9-1. “I’m not going to mince words. It was not a good performance. Again, the opportunities that we had and the defensive plays that we didn’t come up with means overall it wasn’t a good game for us.”

Former Quakes forward Adam Jahn came off the bench with the score 2-0 and banged home a knockdown by Mensah of a Justin Meram corner kick to get Columbus back in the game, but it could not make up the deficit caused by two defensive breakdowns.

On the first San Jose goal, rookie defender Alex Crognale went for the steal rather than just crowd Michael Urena onto the byline, and Urena scored from close range with a low shot off the inside of the far post.

“That’s way too easy a goal to concede,” said Berhalter. “We’ve been playing young guys, we’re the youngest team in the league, but it’s not an excuse. The guys are capable and we’ve got to make sure that doesn’t happen.”

San Jose doubled its lead on a great dribble by Tommy Thompson, who evaded several opponents to set up a point-blank chance that Chris Wondolowski couldn’t miss. Only four teams have conceded more goals than the 39 allowed by Columbus, and none of those teams is in a playoff spot. It has given up at least two goals in nearly two-thirds of its games (14 of 24).

“Conceding goals is an issue,” said the former U.S. international defender, who ended his playing career with the Galaxy in 2011 and coached Swedish club Hammarby IF before taking the Crew job four years ago. “It’s too easy to score against us and we have to correct that.”

Last January, the club signed Mensah, a Ghanaian international who played against the U.S. in the 2010 and 2014 World Cups, to shore up a back line that had conceded 111 goals combined in 2015 and 2016. His adjustment to MLS has been rough, and Berhalter has used both three-man and four-man back lines to give the defense some stability.

The coach has also devised ways to make up for the absence of Higuain, sidelined for the past month by a sprained knee after scoring nine goals and logging five assists in his 18 appearances. He is third on the team’s all-time list with 48 goals.

“First of all he’s injured and he’s working his way back,” said Berhalter of Higuain’s absence Saturday. “And of course, every game he’s not on the field we miss him. He’s a big piece of what we do but he’s not able to play right now. We have to move forward. We have to get guys on the field who can come up with plays.”

Aside from his corner kick that set up Crew SC’s goal, Meram seldom posed a serious threat, though a few promising sequences in combination with forward Ola Kamara fell apart in the attacking third of the field. Meram and Kekuka Manneh spent time on both flanks and Manneh’s night ended early when he was substituted in the 56th minute after producing one shot on goal and no key passes.

Berhalter refused to lay blame on Crognale or Manneh or anybody else, and bemoaned the openings that were created but not exploited.

“There was some good play, good movement, good opportunities, and we just didn’t come up with the plays,” he said. “That’s disappointing.”

Of Meram, who leads the team in assists with seven and is second in goals -- with nine -- to Kamara’s 11, the coach said, “I think he got enough of the ball. I think he was active enough on the ball to make some plays. Unfortunately it didn’t turn out in his favor.”

Only 10 games remain in the regular season so there’s not much time for Berhalter to work Santos into the team. The DP slot filled by Santos was opened up in March, when Columbus used TAM money to buy down the salary-budget charge on a new contract for midfielder Wil Trapp below the DP threshold of $480,625.

The native of Lisbon comes to MLS from Sporting Braga in a deal described as Crew SC’s “largest acquisition transfer fee in club history.”

As for the immediate future, Crew SC returns to MAPFRE Stadium this weekend after three road games -- all of which it lost -- to play nearby rival Chicago, which is second in the conference behind Toronto FC and twice played Crew SC early in the season. The teams tied 1-1 at MAPFRE on opening day and the Fire took a 1-0 home win April 8.

“This is a must-win, I feel,” said Jahn. “We need to get back to winning ways and we’re focused on that already.”

When asked if the current squad was good enough to meet his standards and expectations, Berhalter said, “I don’t know. We’ll see. I hope so, but guys have to step up.

“It’s just about being more consistent. We can hurt teams and we have to do that on a more consistent basis You don’t want to single guys out. We pride ourselves on having a collective group and our playing style’s about the collective, so it’s not about any one person. The whole group needs to step up.”